Fun from A to Z: 26 Iowa Attractions

Learning about Iowa’s destinations is as simple as learning your ABC’s. Discover these 26 fun family activities for all ages from tots to teens.

A is for AIRPLANES 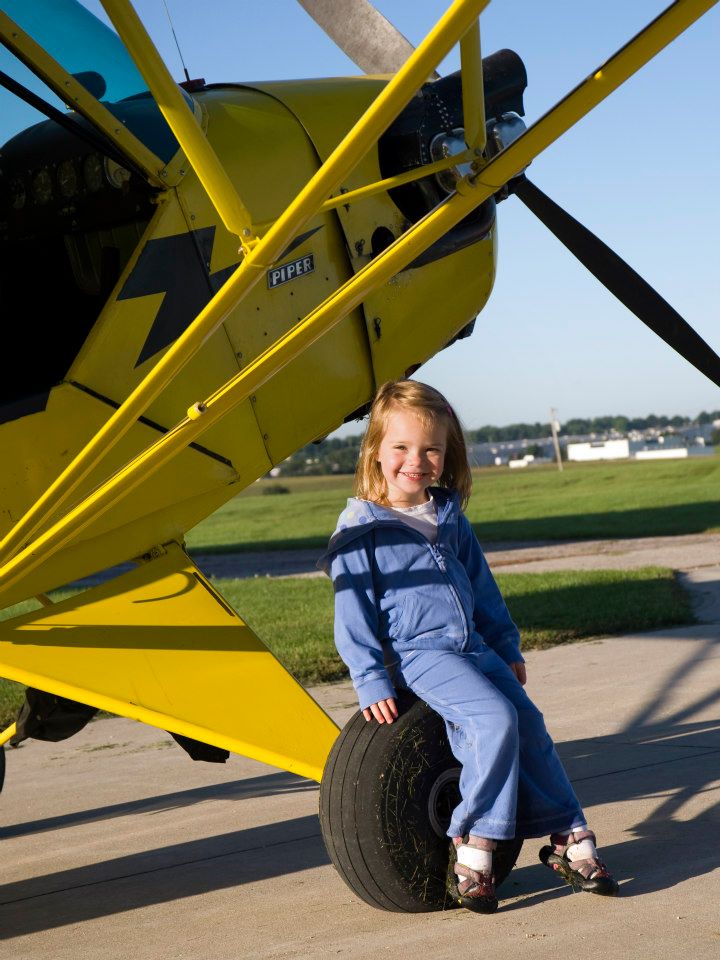 More than a dozen pre-WWII airplanes pack a hangar at Greenfield’s Iowa Aviation Museum. A red 1932 Glider hanging from the ceiling was once used to teach youngsters how to fly: Horses or an auto pulled the glider as teachers ran alongside shouting instructions. Old photos and newspaper clippings line the walls of the Iowa Aviation Hall of Fame, spotlighting Iowan’s role in aviation. Outside, two military aircraft park on the grass.

B is for BOULDER 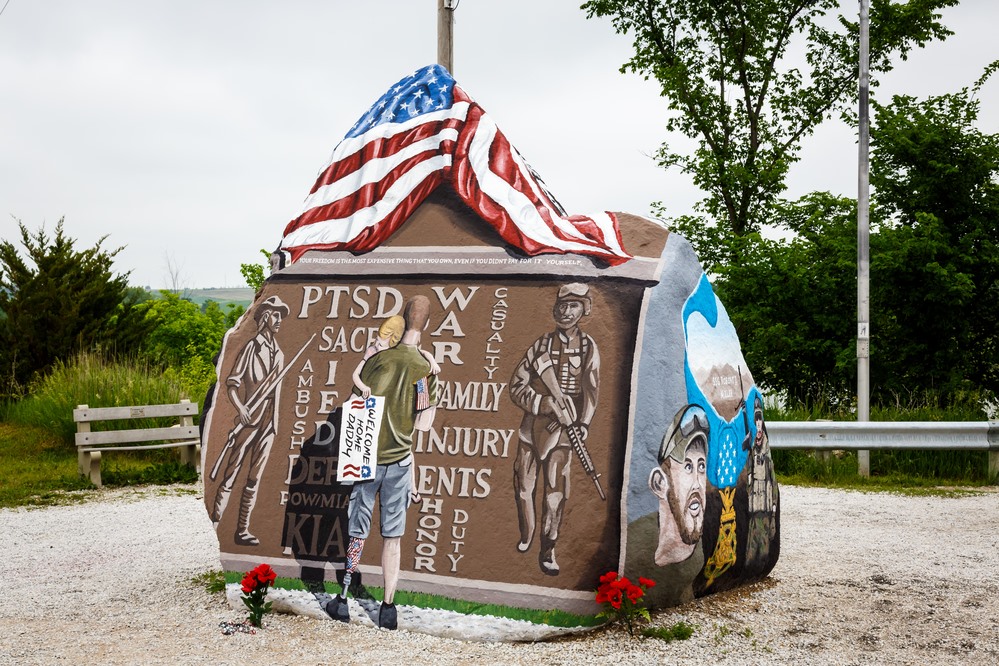 Every spring, local artist Ray “Bubba” Sorensen II paints multiple mural scenes honoring the military on the 12-foot Freedom Rock® just south of Interstate 80, north of Greenfield. A green helicopter is one image that doesn’t change: The paint contains the ashes of Vietnam Veterans. To see previous years’ murals, flip through photos and a tattered notebook that doubles as a guest book. Extend your travels with The Freedom Rock® Tour, which will soon incorporate a Freedom Rock in each of Iowa's 99 counties.

C is for CROOKED STREET 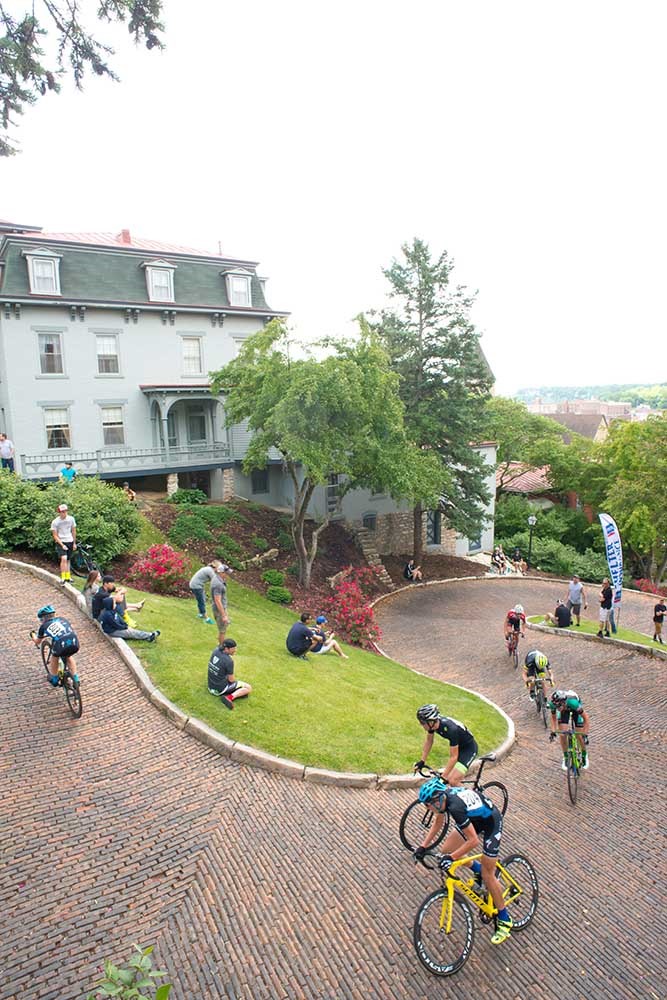 For toddlers, it’s a teachable moment: Count the curves (seven). For everyone in the car, it’s hairpin turns as your car slowly makes it way down Snake Alley. Ripley’s Believe it or Not deems Burlington’s street from Columbia to Washington "unbelievably crooked." Houses lining the original, 1894 brick street are even older.

D is for DRAGONFLIES 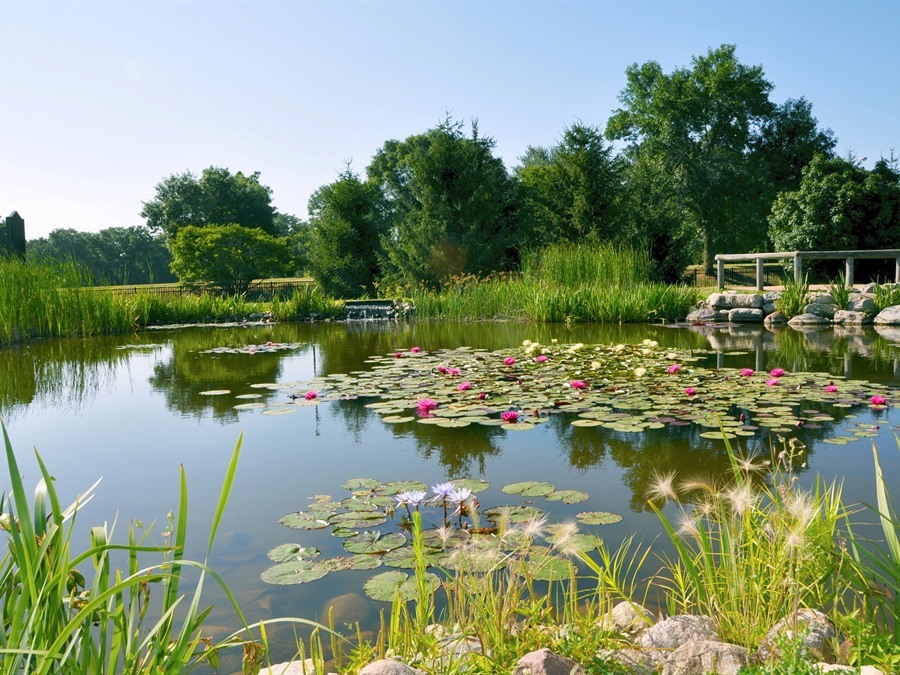 While wandering Ames’ Reiman Gardens, keep your eyes open for native insects like butterflies, bees, beetles and dragonflies. The big-eyed insects can be found around lily-dotted Lake Helen. For more fluttering insects, the Christina Reiman Butterfly Wing houses up to 800 butterflies from six continents.

E is for EMU 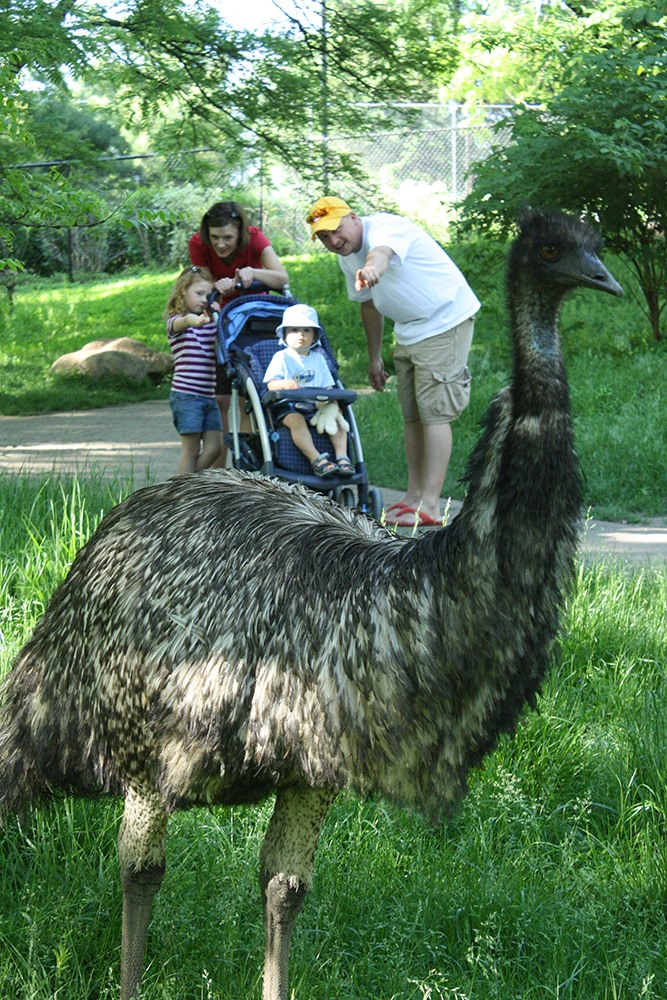 Meet Buzz, a big bird that can’t fly, and his friends at Blank Park Zoo in Des Moines. Tiny wings (about the size of a person’s hand) render this bird flightless. But, the emu’s strong legs make it a fast runner—up to 30 mph in the wild.

F is for FISH 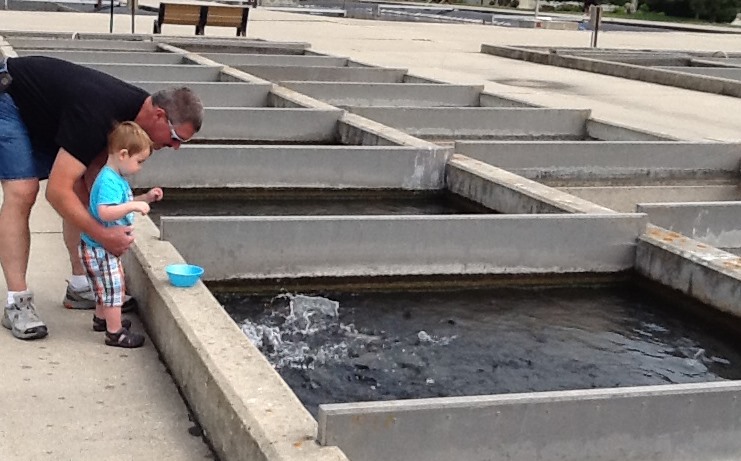 Brook and rainbow trout jump as children approach long pools with a quarter’s worth of food at Decorah’s Fish Hatchery. While the fish are entertainment for families, they are an easy meal for the nearby roosting Decorah eagles. For better eagle viewing, bring binoculars or log on to the webcam. From the parking lot, pick up the 11-mile Trout Run Trail, which loops around the city.

G is for GRIST MILL 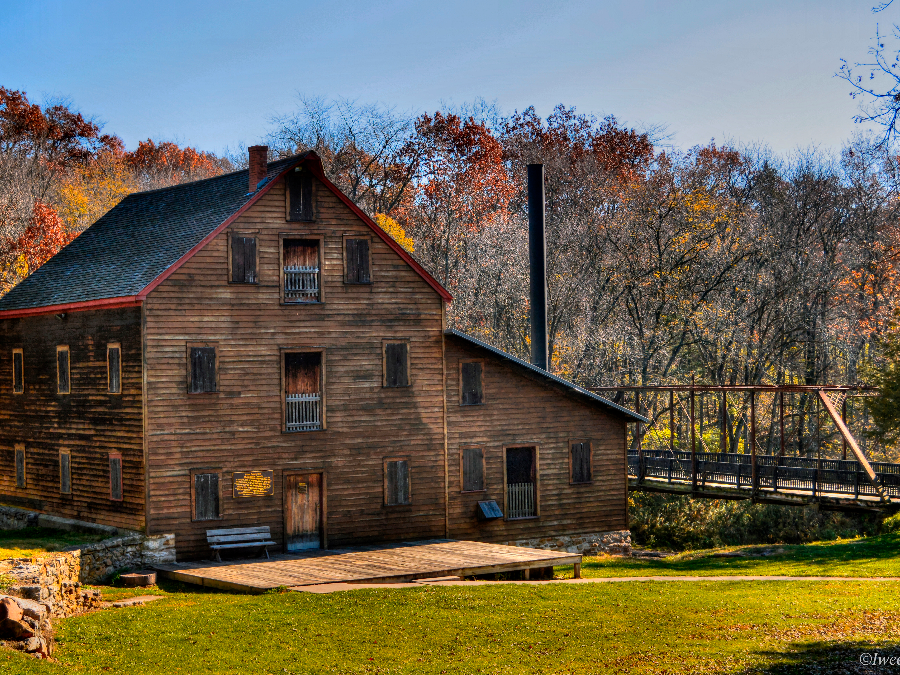 In the mid-19th century, Pine Creek Grist Mill was a hotspot. Locals went there not only to have grain (also known as grist) ground into flour or feed for livestock but also to catch up on community happenings. Melpine, a one-room school with desks, lunch buckets, books and other memorabilia on display, stands near the mill at Wildcat Den State Park in Muscatine.

H is for HORSESHOES 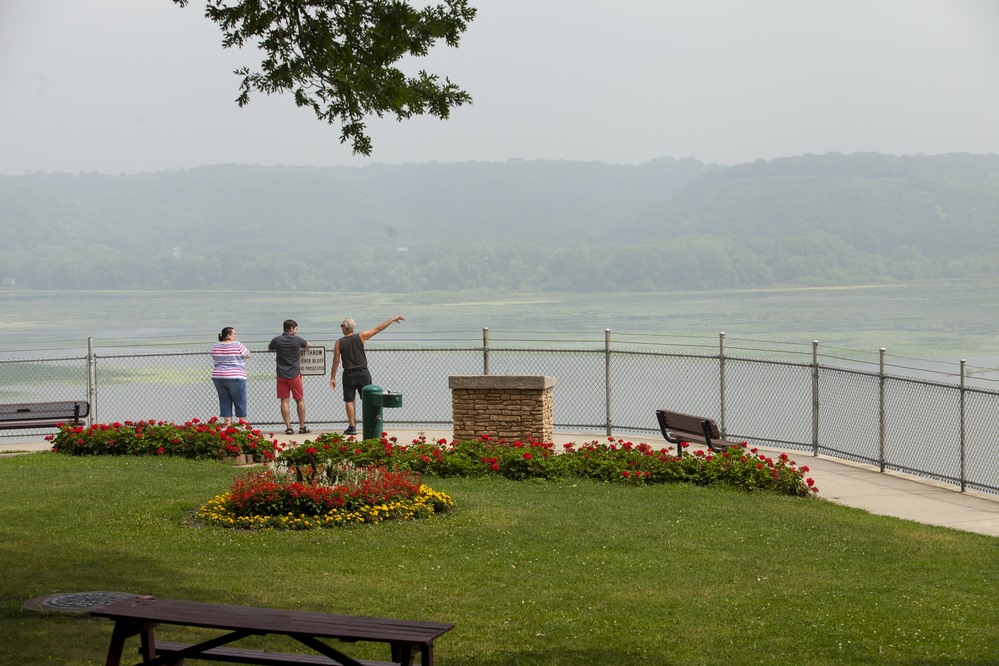 Toss a few shoes at a court with one of the best views in the state at Eagle Point Park in Dubuque. After the game, follow the Riverview walk along the edge of the bluff for amazing views of the Mississippi River and Lock and Dam No. 11.

I is for ICE CREAM 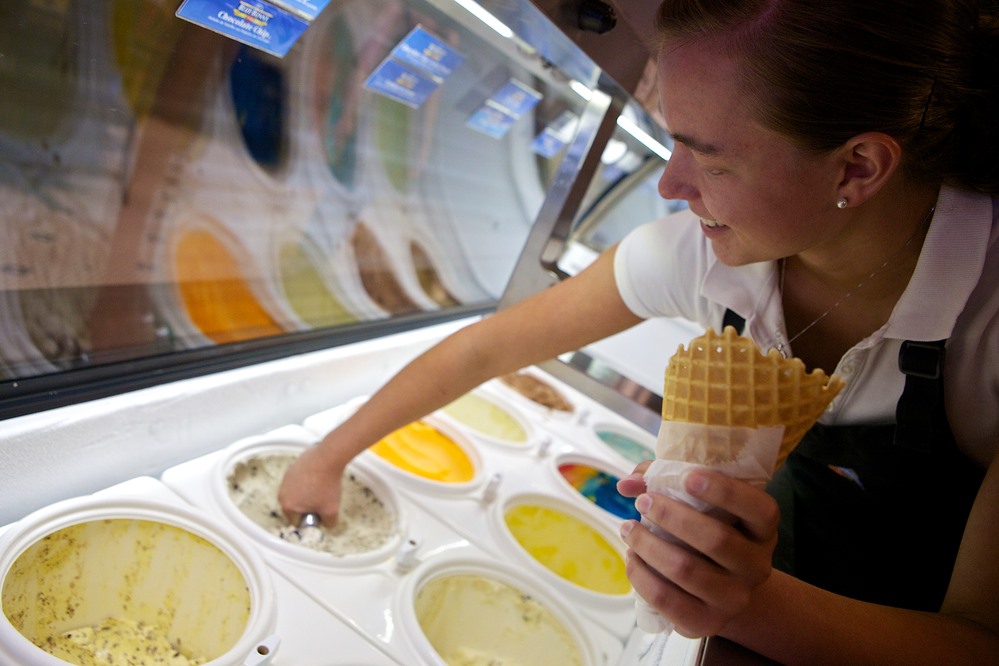 A cherry tops a four-scoop sundae sculpture at the entrance of the Blue Bunny Ice Cream Parlor in Le Mars, the official Ice Cream Capital of the World. Create your own sundae from more than 30 flavors and 11 toppings. Can’t decide? Vanilla ranks No. 1

J is for JUPITER 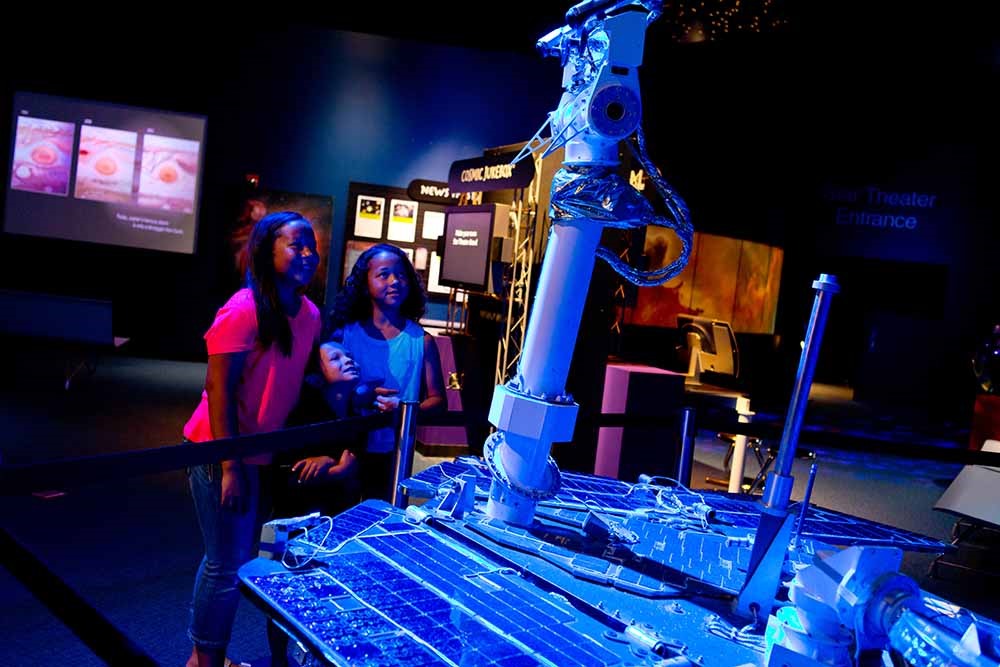 Learn more about the biggest planet and the rest of the solar system at the Why the Sky experience platform on the second floor of the Science Center of Iowa in Des Moines. See the night sky in the Star Theater, the museum’s digital planetarium and explore the corresponding exhibits about space exploration.

K is for KAYAK 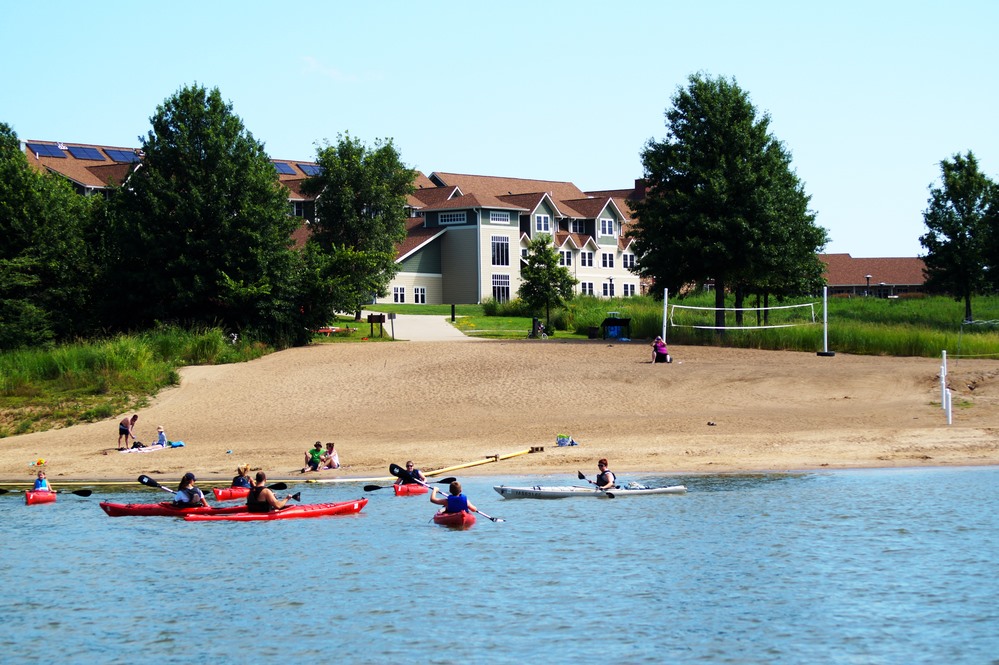 L is for LIGHT SHOW

As the sun sets over the Missouri River, beams of light come out to play at Tom Hanafan River’s Edge Park in Council Bluffs. Whether tracking kids dashing across the lawn or grown-ups walking, the lights create an impressive show of vibrant hues and patterns. Come early for a picnic or views of the riverfront at this park.

M is for MAMMOTH 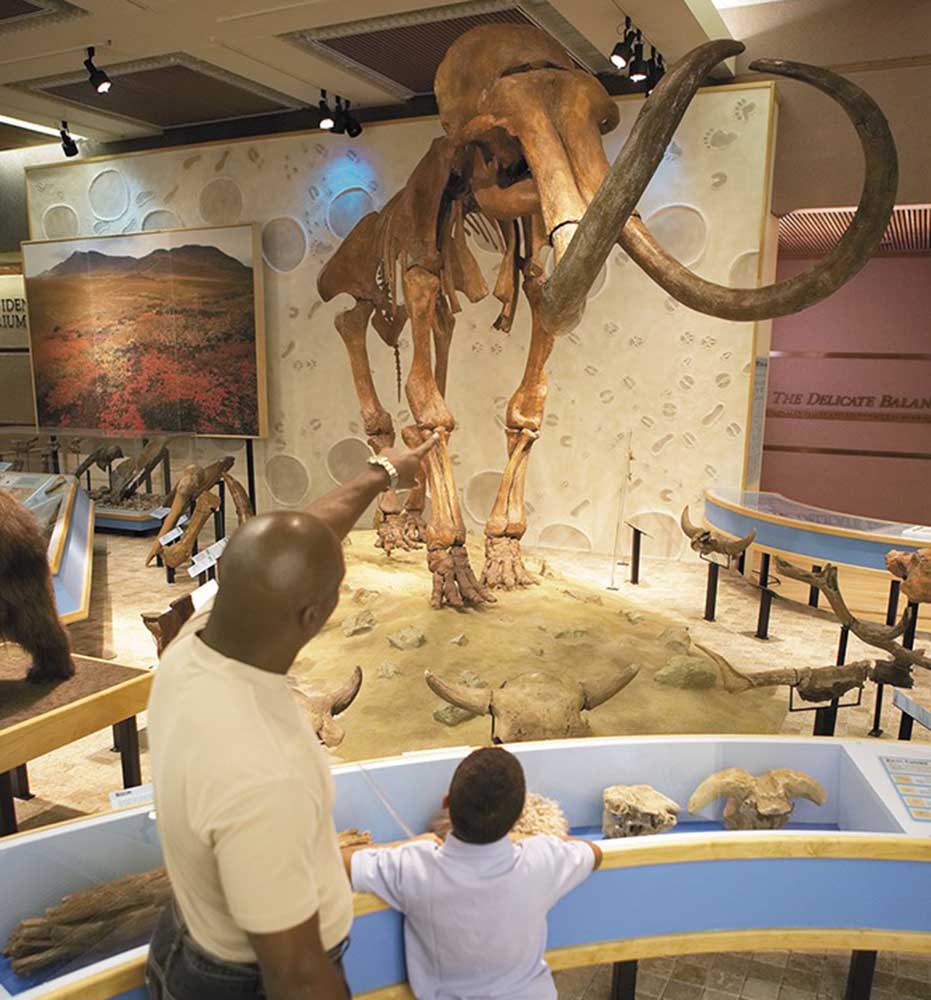 The skeleton of a woolly mammoth that lived more than 15,000 years ago greets guests in the three-story atrium of the State Historical Museum of Iowa in Des Moines. Bones from one of these approximately 10-foot-tall beasts were dug up in downtown Des Moines in 2001. The free museum includes exhibits exploring the people, places and events that shaped Iowa’s rich heritage.

N is for NATIVE AMERICANS 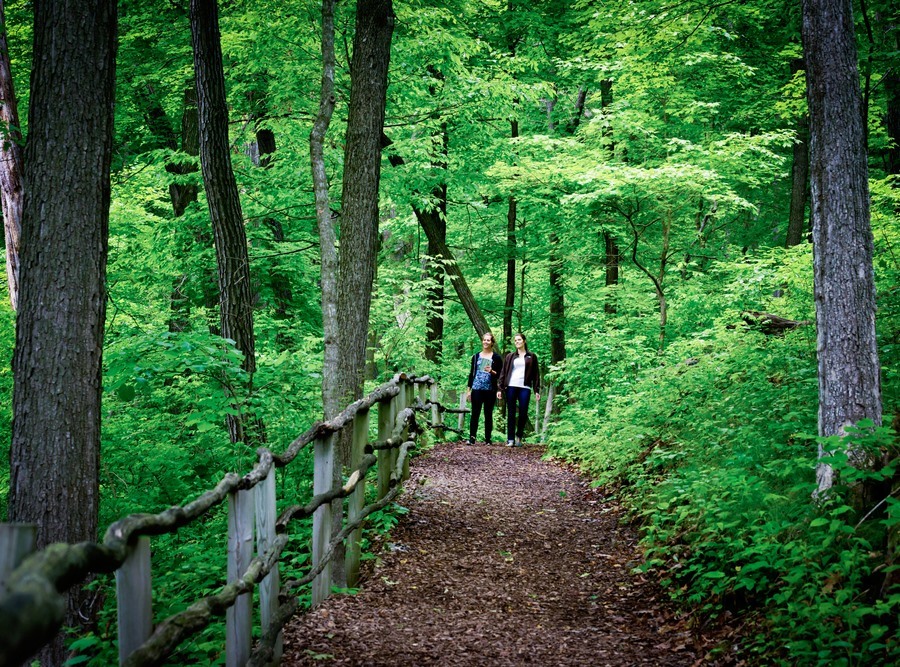 Mounds in the shape of bears and birds date back 850 to 1,400 years at Effigy Mounds National Monument in Harpers Ferry. Learn about the mounds and the Native Americans who made them during a 15-minute film and children’s please-touch exhibit in the visitors center. Afterward, set out to explore the 206 mounds.

O is for OWL 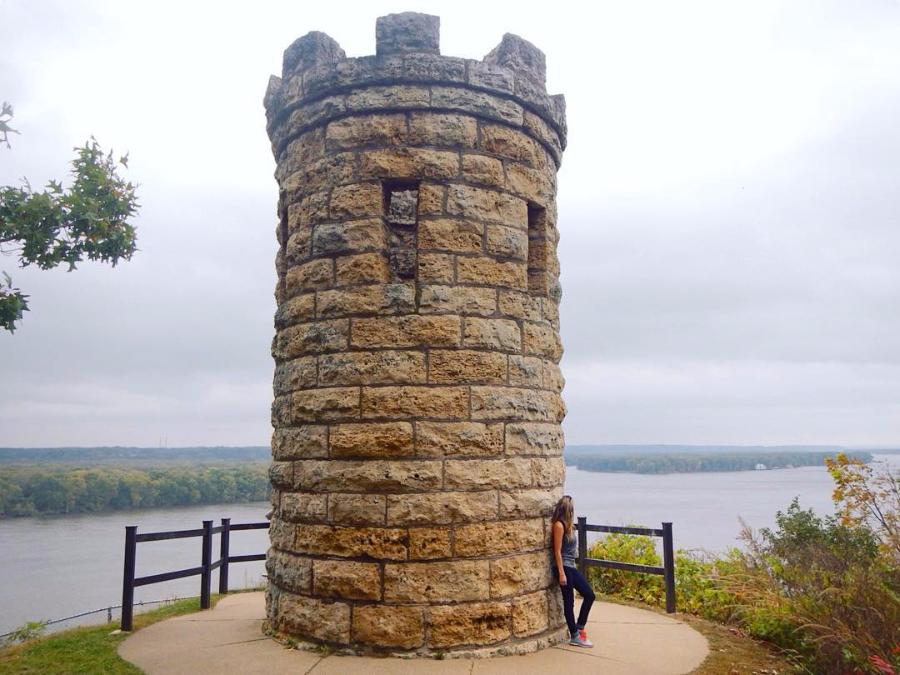 Odds are you’ll hear a great horned owl before you’ll see one. The distinctive call might be a clue where to look in Dubuque’s Mines of Spain Recreation Area. Not up to dawn or dusk stroll to see the owls? Spot other birds along nature trails winding through restored prairie and forests. Learn more at the E.B. Lyons Interpretive Center.

P is for PRECIOUS STONES 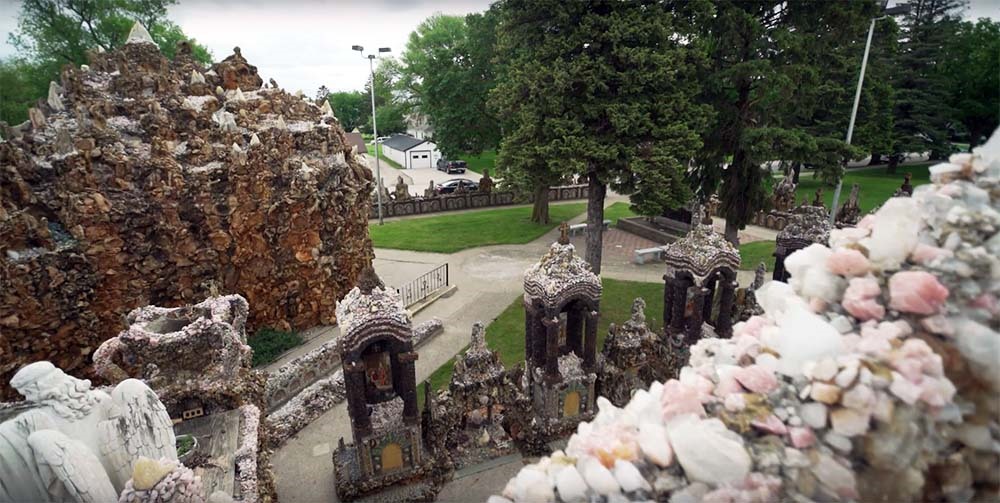 Shrine of the Grotto of the Redemption, West Bend

The Shrine of the Grotto of the Redemption attracts visitors to biblical displays studded with precious and semiprecious gems in nine grottos in West Bend. Pearls, rubies, sapphires and a 300-pound amethyst sparkle in the Christmas Chapel. For more information, join one of the hourly tours.

Q is for QUILTS 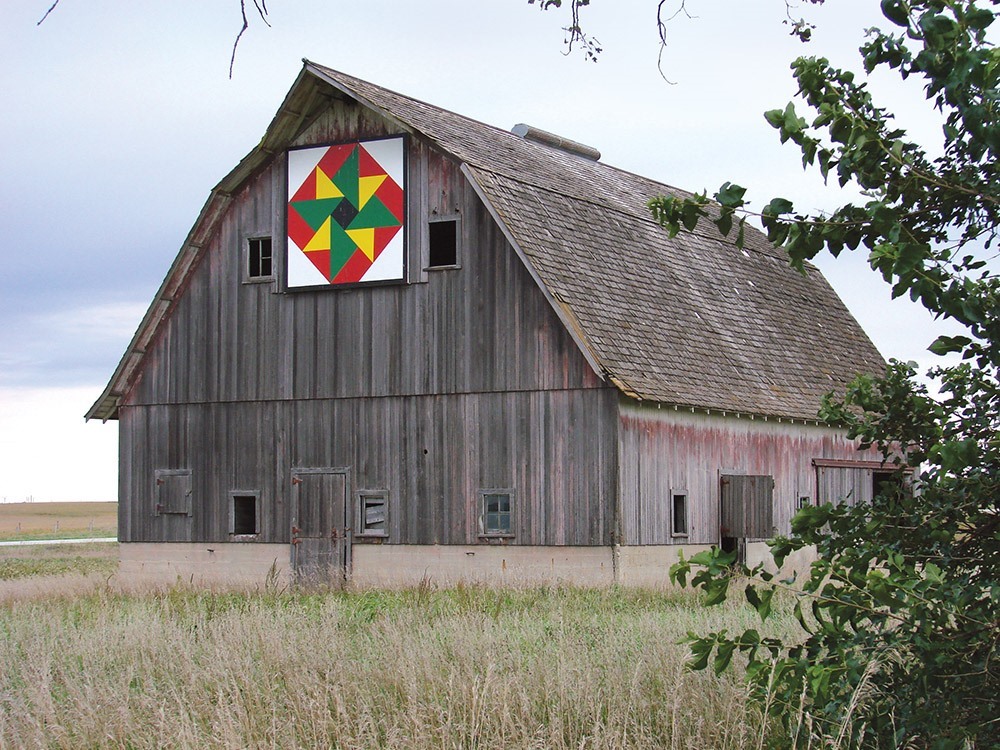 Colorful 8x8-foot quilt panels adorn more than 100 barns and farm buildings throughout Hamilton County. On the self-guided driving tour you’ll see the bright patterns, which include blades in reference to a nearby wind farm in Webster City, a sunflower in Stanhope and a Dala horse on a Stratford century farm. Kids have fun playing the game I Spy and hollering when they spot a quilt on a side of a barn or building.

R is for ROLLER COASTER 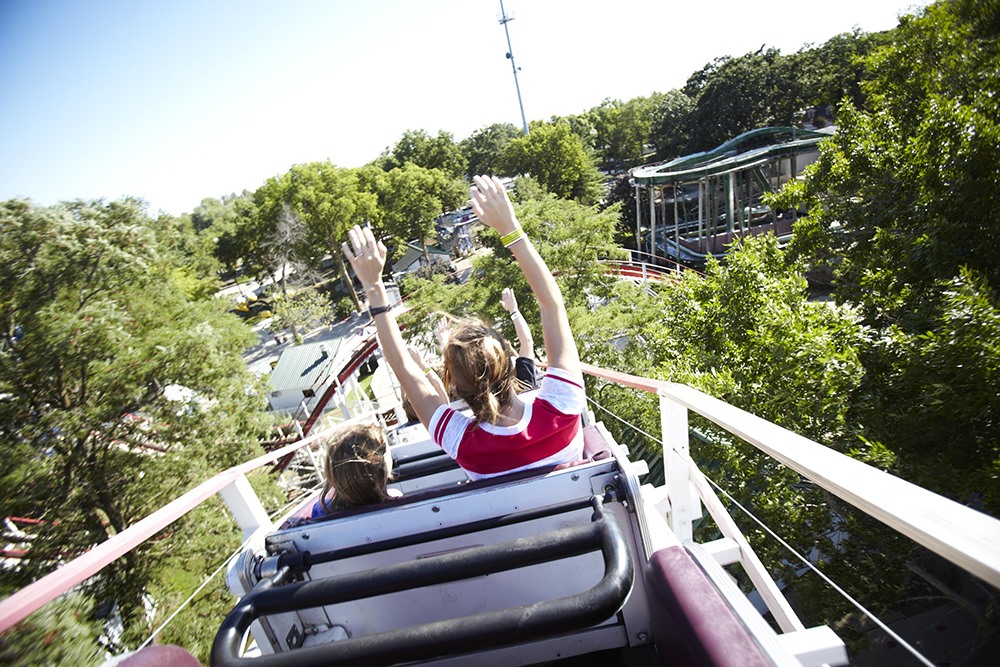 Giggles erupt and hands from the short set (under 54 inches) wave as they ride Dizzy Dragons, Freddie the Fish and Pirates Revenge at Arnold’s Park in Okoboji. The Legend, the park’s best-known coaster and world’s 13th oldest operating wooden coaster, tops out at 50 mph. Teens rock, roll and flip upside down—if they dare—on the Rock-O-Plane.

S is for STATUE 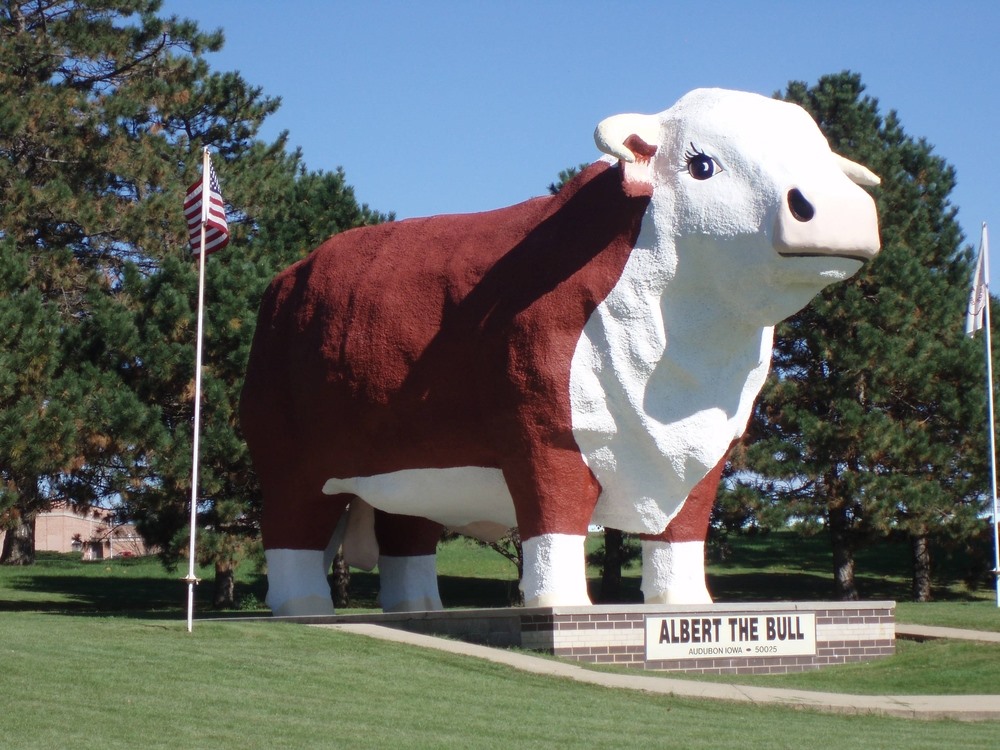 Albert the Bull isn’t just any statue; he’s the world’s largest bull. The voice of Albert shares details about himself when visitors press the button at the information kiosk. Close to 20,000 people come to Audubon annually to see the 30-foot-tall, concrete-and-steel, doe-eyed statue that weighs 45 tons.

T is for TOWER 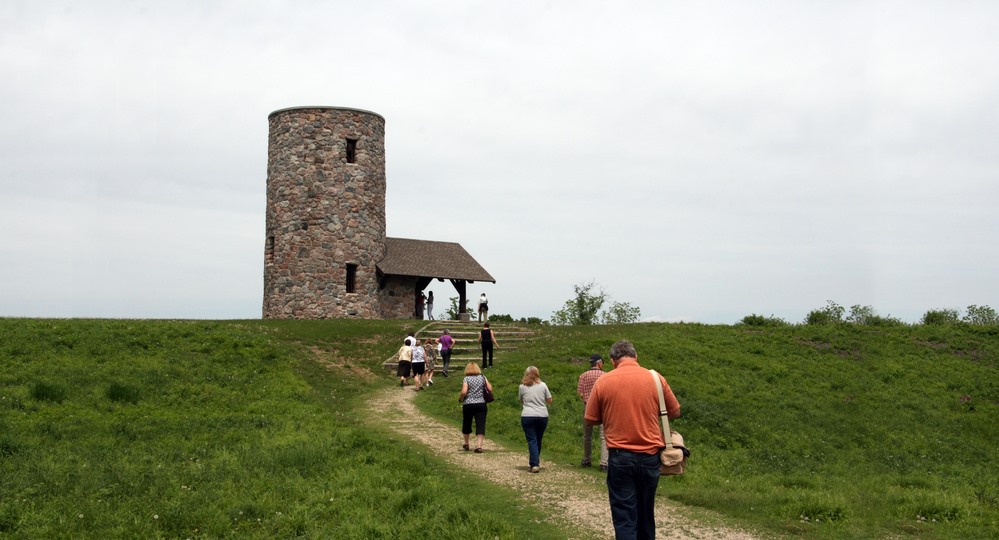 While the 35-foot observation tower isn’t necessarily skyscraper height, it does sit on the second highest point in Iowa. From Forest City’s Pilot Knob State Park lot, it’s a short but steep climb to the top of the tower built with local glacial boulders.

U is for UNDERGROUND RAILROAD 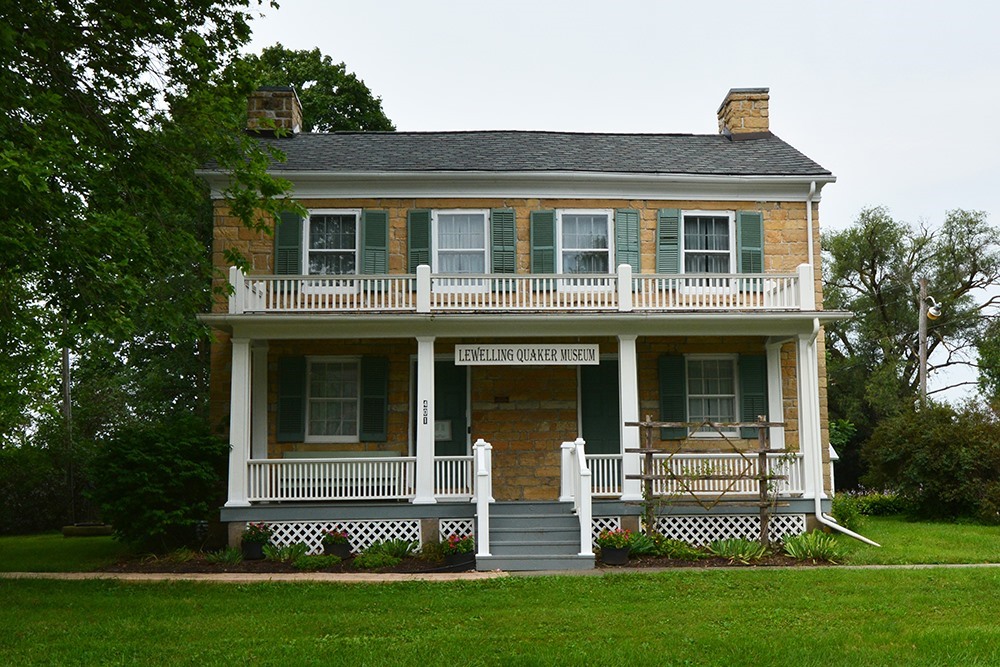 On their journey north from Missouri, most slaves overnighted in Salem, 25 miles north of the state line. Iowa’s first Quaker community was a key stopover on the Underground Railroad to freedom. Abolitionists used railroad terms such as conductor, engineer and agent as code words. The Lewelling Quaker Museum, once a residential home, was known as the ticket office, or depot. Tour the home and see leg shackles and a trap door in the kitchen.

V is for VALENTINE 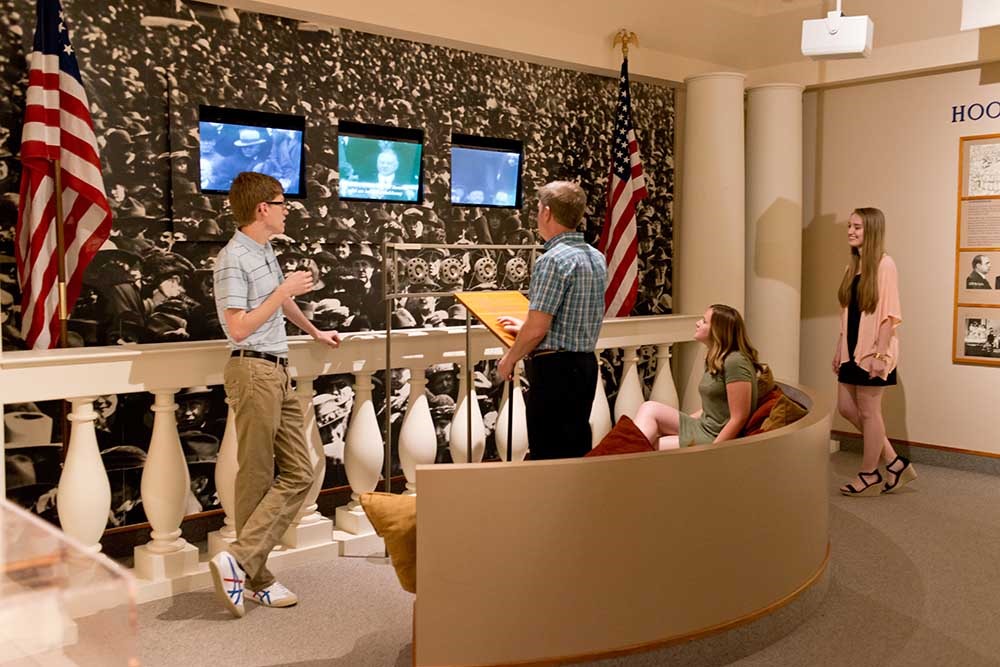 Kids get a look into the childhood of the 31st president at the Herbert Hoover Presidential Library and Museum in West Branch through items like a valentine and toy train. In addition to his boyhood home, tour a blacksmith shop, schoolhouse and meetinghouse at the National Historic Site. Fun facts: He was an avid fisherman, the first president born west of the Mississippi River and the only president from Iowa.

W is for WINDMILL 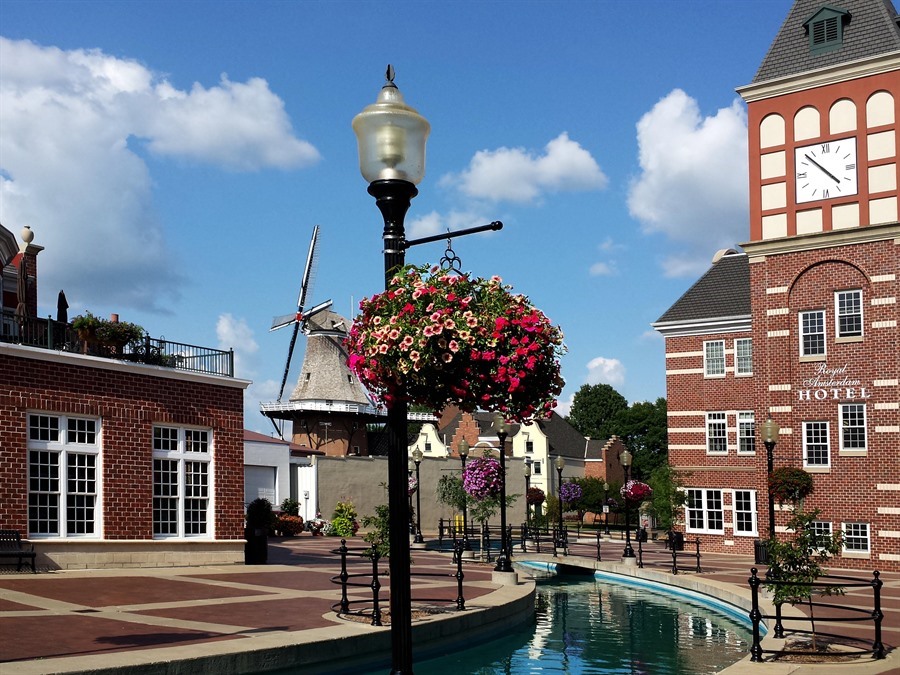 Inside the tallest working windmill in the United States, you’ll see how its 82-foot-long blades turn the millstones that grind wheat into flour. Buy a souvenir bag of flour, or taste the end result at some of Pella’s local bakeries and restaurants. At Vermeer Windmill and Historical Village next door, tour 22 original, restored and relocated buildings, including Wyatt Earp’s boyhood home. 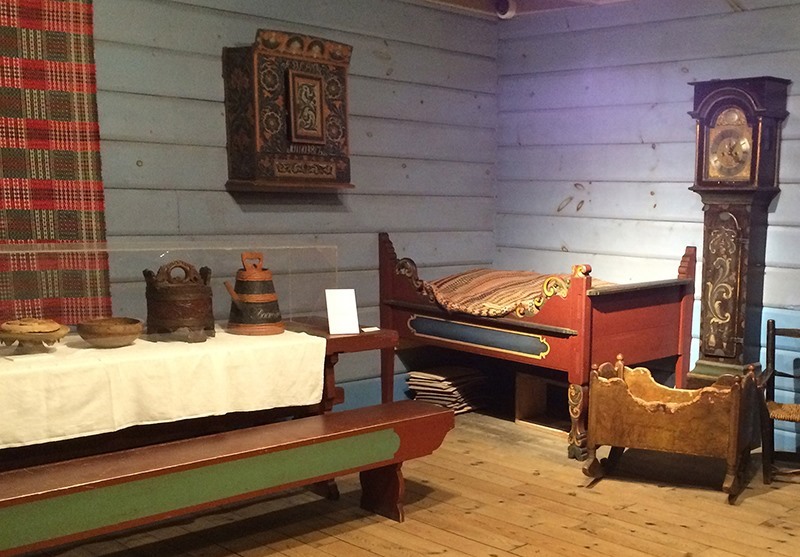 To see more than 24,000 artifacts scattered across 16 historical buildings, plan at least a day (and a return trip) when visiting the Vesterheim Norwegian American Museum in Decorah. It’s the United States’ most comprehensive museum dedicated to Norwegians. Begin your visit on the first Thursday of the month, when admission is free.

Y is for YURT

Yurts are soft-sided round structures traditionally used by nomadic tribes in Central Asia. In Iowa, you can also find yurts as unique lodging amenities in Pammel Park near Winterset and McIntosh Woods State Park near Clear Lake. The yurts feature heat and air conditioning and sleep four to eight people comfortably.

Z is for ZUCCHINI 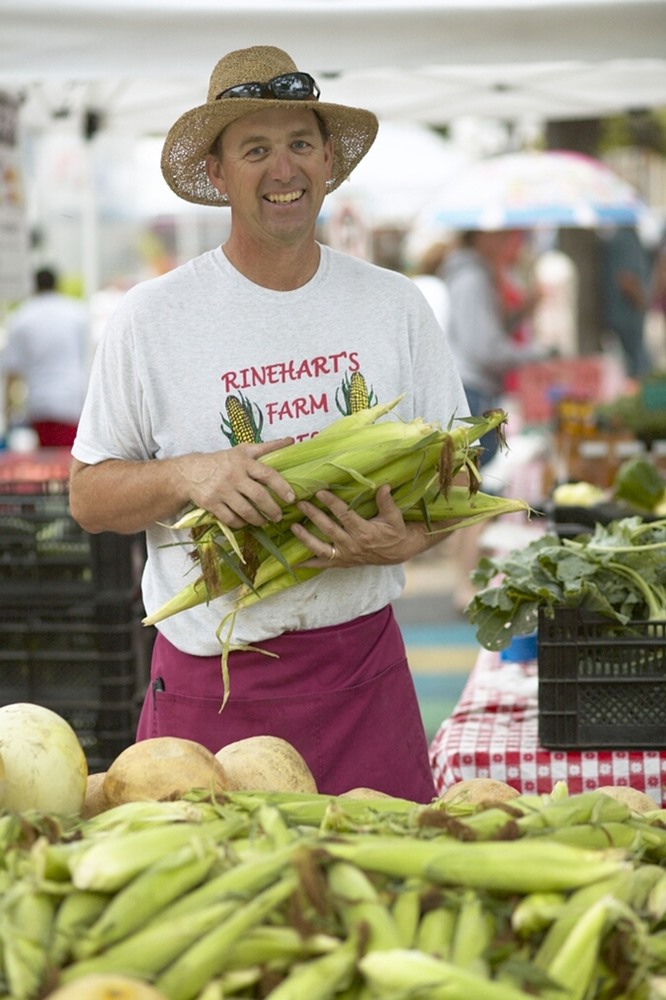