Nothing illustrates perseverance quite like Iowa's historic theaters. Combining historic charm with modern technology, these theaters have entertained locals and visitors for over a century. Whether you're looking for live action performances or hoping to catch the latest movies, check out these 10 locations for a truly unique experience.

Verified as the world’s oldest continuously operating cinema theater by Guinness World Records, the State Theatre in Washington has entertained guests since 1897. Today, it stays true to its history with a gold waterfall curtain that’s lifted before each show, a digital marquee displaying theatre events, a classic 1948 popcorn machine and $5 admission for adults. All that mixed with a digital projection system that shows movies in 2-D and 3-D, surround sound, upgraded seats and new carpet makes it a truly unique entertainment destination. 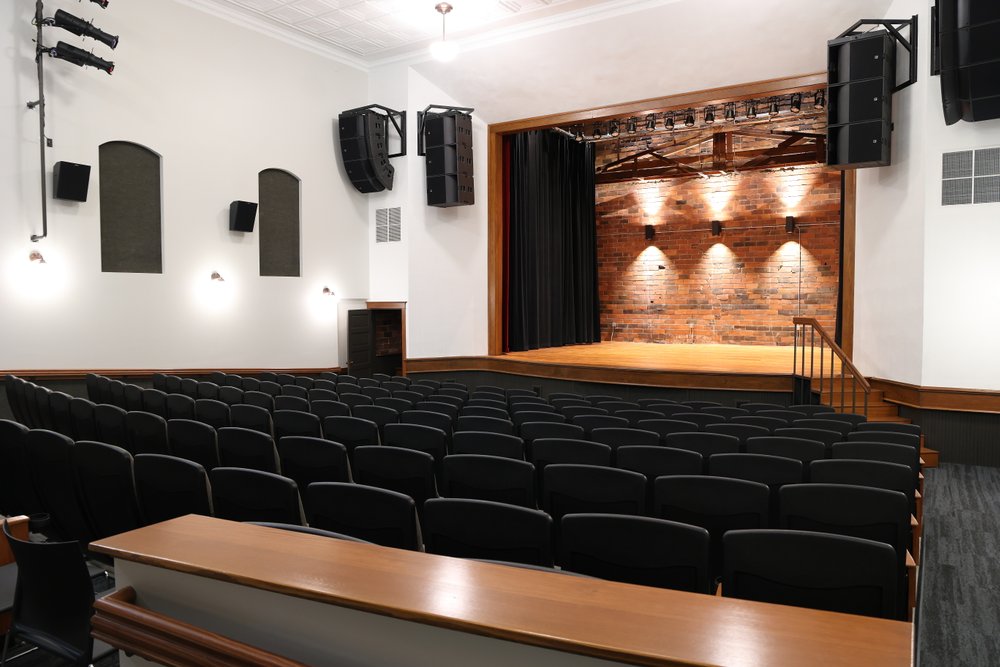 After being abandoned for over two decades, the 1911 Brooklyn Opera House re-opened in 2020 as a 250-seat newly renovated landmark facility. With productions offered throughout the year, such as live performances, concerts, speakers, movies and community programming, it has since regained its position as an iconic community building and an exciting destination. While visitors can enjoy its modern performances, they can also appreciate pieces of the opera house’s history throughout the building, including signatures and stickers of past performers that were preserved on the wall behind the stage.

Nicknamed “Castletown USA,” it’s only fitting that Ida Grove’s theater donned the name King Theatre. Built in 1913, the historic building underwent a $750,000 facelift and reopened as a state-of-the-art, 125-seat digital marquee which shows films Thursday through Monday for prices as low as $6 admission for adults. While waiting for the night’s feature to begin, visitors can learn more about the history of the theater by exploring historical documentation displayed throughout the lobby. 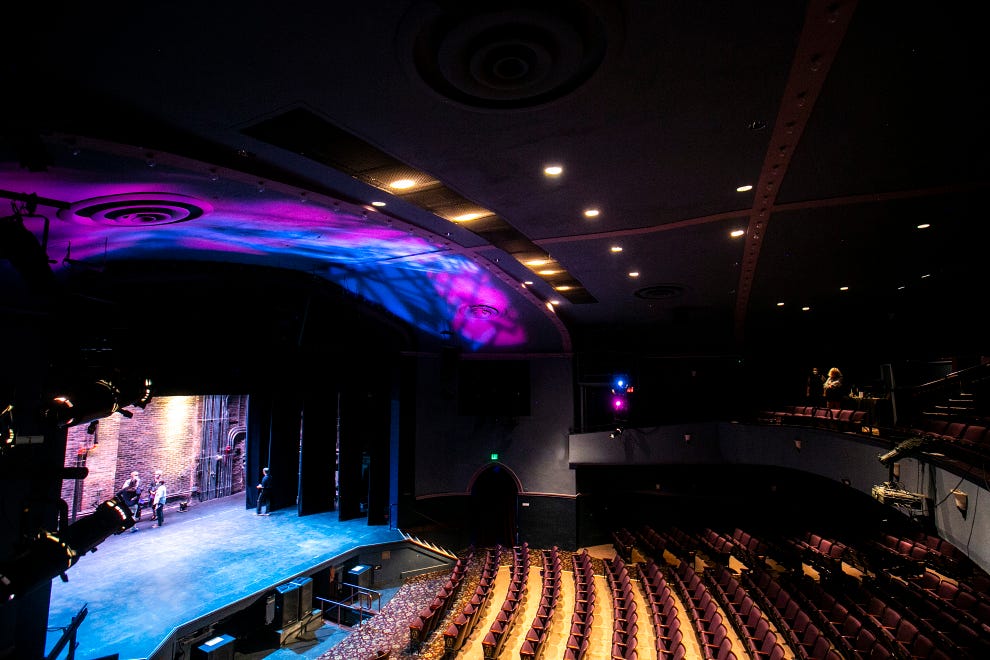 Since opening in 1912, the Englert Theater in Iowa City has persevered through a complex history to once again be a leader in the Midwest arts scene. The 1,071-seat theater that once housed Vaudeville acts from around the world now features year-round music concerts, musicals, plays and dance recitals as well as two innovative annual art festivals. Along with exciting performances, the theater offers tours for guests to step back in time and explore the building’s ornate 1900s aesthetic, such as its vintage marquee, the original wood around the windows and brick wall of the backstage and the historic changing rooms.

Since it was built in 1899, the Metropolitan Opera House in Iowa Falls has been one of the most renowned buildings in the area. Its opening was the biggest social event in the history of the community, and it has since hosted stars such as John Phillip Sousa, Otis Skinner and Hugh Jackman. Today, the beautiful Italian Renaissance-style building thrills historians and modern movie-goers alike. Its latest technology presents movies in crystal-clear picture and its historic arched doorway, featuring a carved bust of Shakespeare, musical emblems and the masques of comedy and tragedy, makes this theatre one to remember.

Recognized as the site that showed the first talking picture in Pottawattamie County, the Phoenix Theater has once again risen from the ashes (literally) to be a household name in the area. After the original theater burnt down in 1912, another was built in its place, and was named after the mythological bird born of fire. Today, the 98-seat, 1913 single-screen theater combines nostalgia like its glass façade and old-time admission of 99 cents with modern performances from movies, live plays and magic shows to video game tournaments and music concerts. 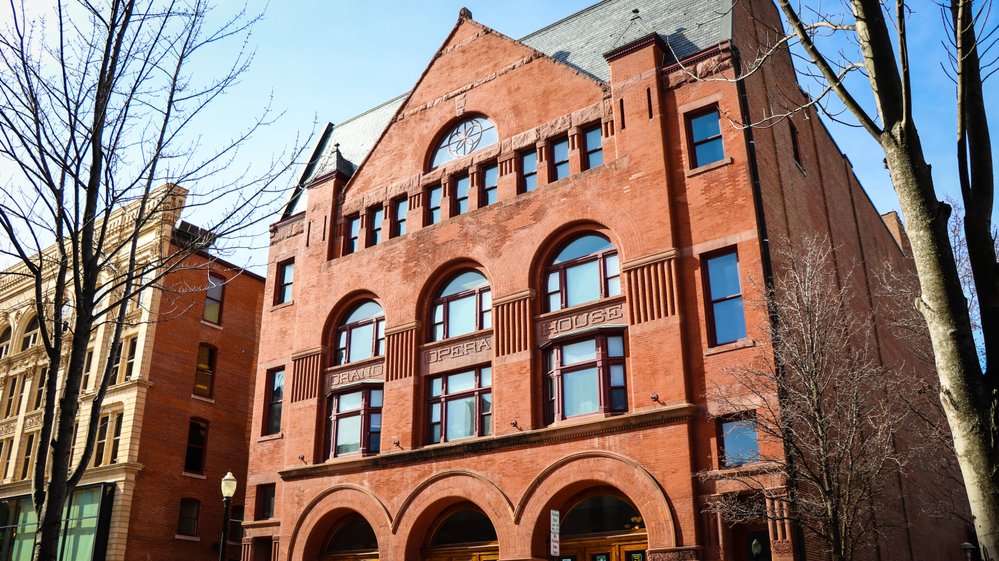 Dubuque’s Grand Opera House has provided one of the best small theater experiences in the country since opening in 1889. It saw more shows during the Golden Era than any other similarly-sized theater in the US and attracted stars like Henry Fonda, Ethel Barrymore and George Cohan. After being restored back to its original 1890s look by community volunteers, it now features award-winning community theater productions, live concerts, critically acclaimed touring productions and film showings. 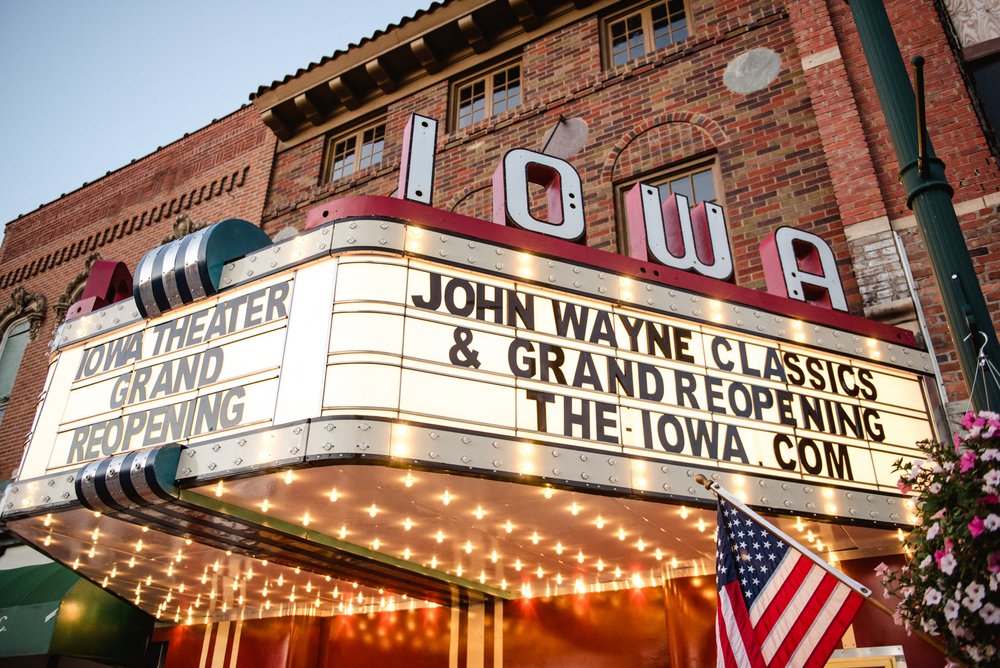 After making headlines in 1930 for presenting the first film with sound, The Iowa Theater in Winterset came to be known as one of the finest motion picture exhibiting houses in the state. After closing in 2015, a local mother-daughter duo purchased the building and restored it to its former glory. The small theater today welcomes visitors to experience on-screen cinema and live performances while surrounded by Iowa history. The Italianate building sits on the historic town square and features the original marquee with updated LED lights and the original terrazzo-floored lobby and ticket booth.

One of the most unique historic theaters in Iowa, visitors driving down Osage’s Main Street can’t miss its neon lights with chrome and pink and teal façade. Opened in 1950 by a local family and restored to its original charm in the 1990s, the now digital 364-seat venue shows a single modern movie most nights at 7 p.m. This must-see theater has also been recognized as one of the 10 Great Places to Revel in Cinematic Grandeur by USA Today. 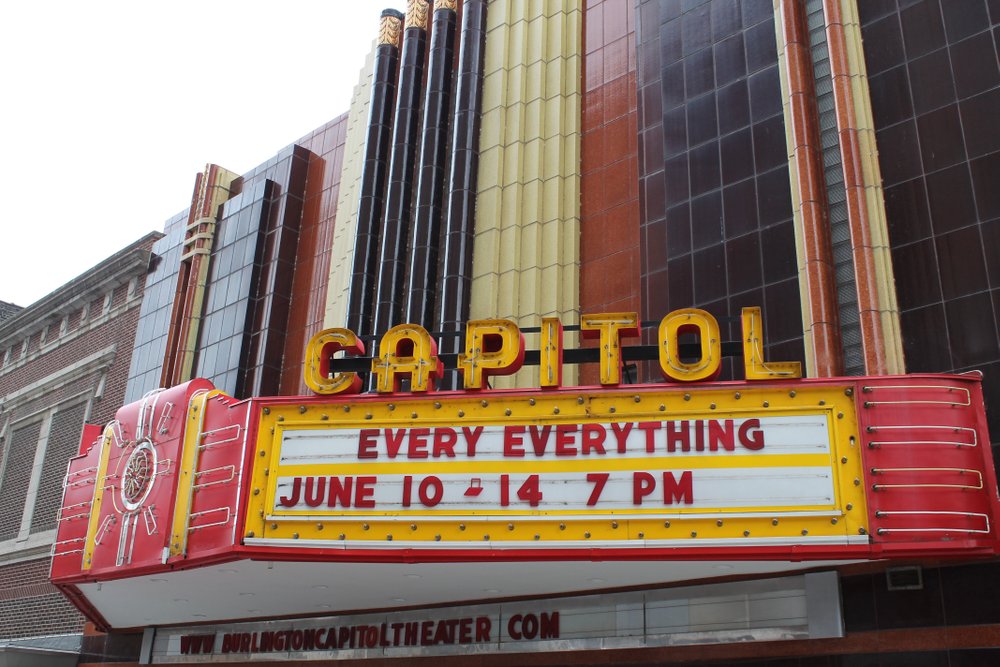 Another must-see theater, the Capitol Theater’s vibrant blue, yellow and red Art Deco façade lights up Burlington’s Main Street. Opened in 1937 with a showing of The Prince and the Pauper, it was once one of the most modern and luxurious theaters of its time and acted as a symbol of hope to the community during the darkest days of the Depression. Today, the 364-seat theater brightens visitor’s days with independent and classic film showings, local, regional and national touring performances and a reception and gallery annex that proudly displays its historical success.

Want to learn more about Iowa’s historic theaters? Plan a visit to the State of Iowa Historical Museum in Des Moines and explore their Hollywood in the Heartland exhibit.