13 of Iowa's Most Haunted

Send shivers down your spine at the state's most haunted spots. 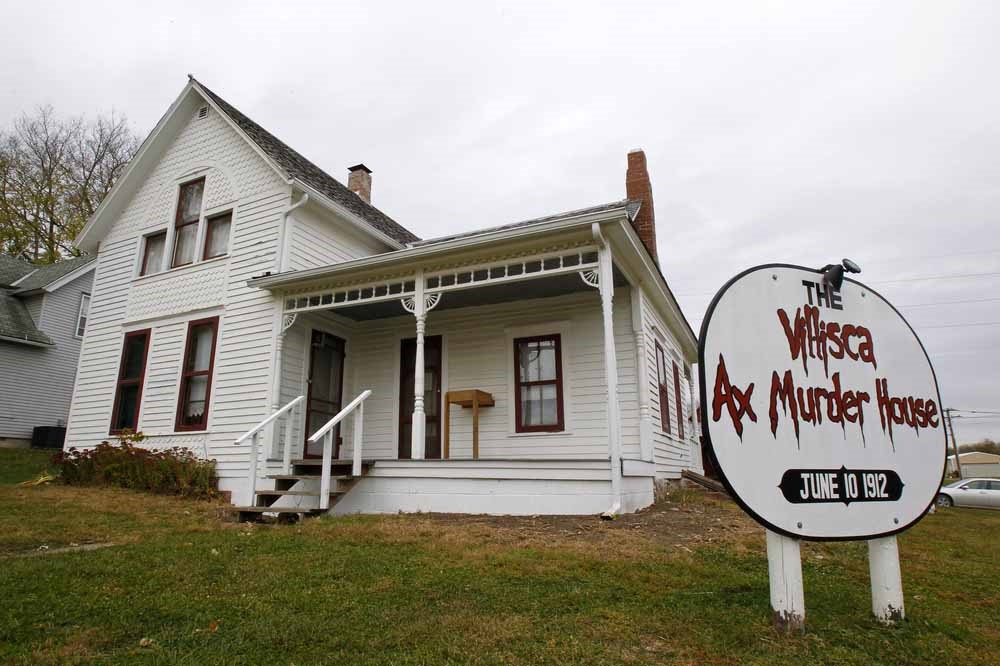 Visitors have reported everything from a door opening and closing on its own, feeling chills and being pinched to hearing children laughing and playing with toys in empty rooms. Experience these sensations and more in the Villisca Ax Murder House, where eight people, including six children, were murdered in their sleep over 100 years ago by an unknown killer. Tour the house and the backyard cemetery or make a reservation to spend the night.

As the second asylum built in Iowa, the Independence hospital was constructed in 1873 to relieve the overcrowding at the Mount Pleasant State Hospital. While most of the building is still in use, an old wing was turned into a "Days of Yore" museum that features a disturbing look back through time at how society treated people suffering from mental illness. You can tour the older wings and the hospital's graveyard by appointment. Visitors have reported hearing whispers, feeling cold drafts, having the feeling that they are being watched and even hearing disembodied screams.

Built in 1921 on donated farmland, the once abandoned schoolhouse sits isolated with only a few buildings around, including a 150-year-old cemetery across the street. After closing its doors in 2001 and sitting abandoned for five years, a local couple purchased the building and quickly realized that it was not completely empty. Voices, slamming doors, shadow people and orbs commonly appear. A small boy was spotted standing motionless on the stairwell. An unseen figure helped steady one of the owners who lost their balance on the stairs. You can experience all of this for yourself by scheduling a daylight tour with the owners, while the bravest visitors can spend the night.

Dating back to the 1900s, this fully restored Victorian Hotel in Strawberry Point will take visitors back in time with its vintage lobby, dining room and staircase. However, throughout its history it has attracted some viistors that refuse to leave. Many claim the hotel is home to two ghosts. One is a woman named Lily who wears a lavender gown and can be heard singing or moaning. She frequents what used to be her room, moving furniture to her preference and walking to and from the lobby. The other is a former merchant known as Leo, who operated the hotel's laundry for 30 years and can be heard ringing the hotel's old bell message system.

Voted as one of the top 10 most haunted theaters in the Midwest, the Cresco Theatre opened in 1915 and offers a 100-year history of live performances and modern motion pictures. While the theatre is still in operation, it is now home to some unwelcome guests. Visitors have witnessed what appear to be ghosts of vaudeville performers on the stage, while another lone ghost has been seen sitting in the theater while the lights are off, disappearing when anyone tries to approach. More unknown entities have been reported in the basement, where strange electrical disturbances occur and odd sounds and voices are heard when the Cresco theater is empty. 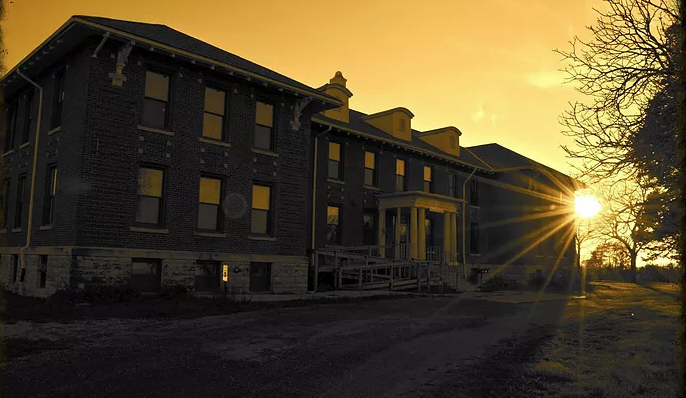 The Edinburgh property is more than meets the eye. Initially designed at a courthouse, the original building was redone in the mid-1800s to be a poor farm, where the poor, disabled and incurably insane farmed the land in return for room and board. Back then, farming was a dangerous task and many accidents and deaths resulted in the addition of a cemetery, where 80 former residents are buried. In 1910, the poor house was demolished, and the Edinburgh Manor built in its place. The new building housed the elderly and those with extreme mental illnesses and disabilities. Operation of the manor ceased in 2010. Today, the Scotch Grove building is open for tours and overnight stays, but be warned -- one of its spirits called "The Joker" is known to be violent, throwing plates across the room and attempting to choke visitors. 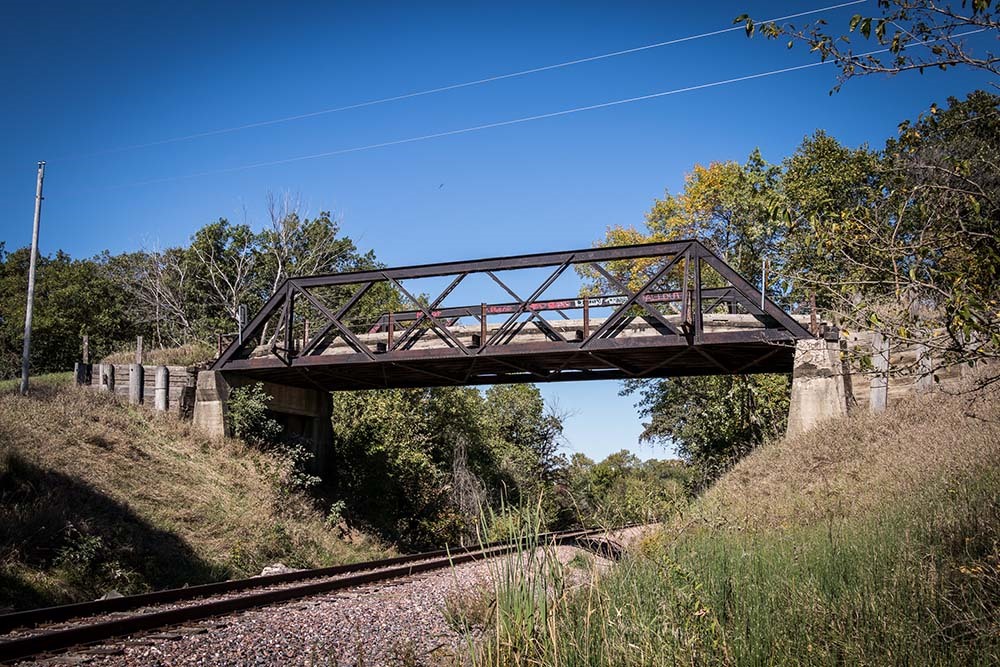 There are many tales behind this rural bridge, but the most popular is rather gruesome. It is said that a woman brought her children to the bridge to watch the trains pass below. Instead, she threw each child over the bridge railings, watching as they were struck and killed before jumping in front of the train herself. Fort Dodge locals warn against stopping your car on the bridge without locking the doors and windows as the woman's spirit may try to throw you off. Visitors who are brave enough to exit their vehicles report seeing strange orbs, hearing voices in the woods or a woman moaning beneath the bridge and finding strange handprints on their car windows. 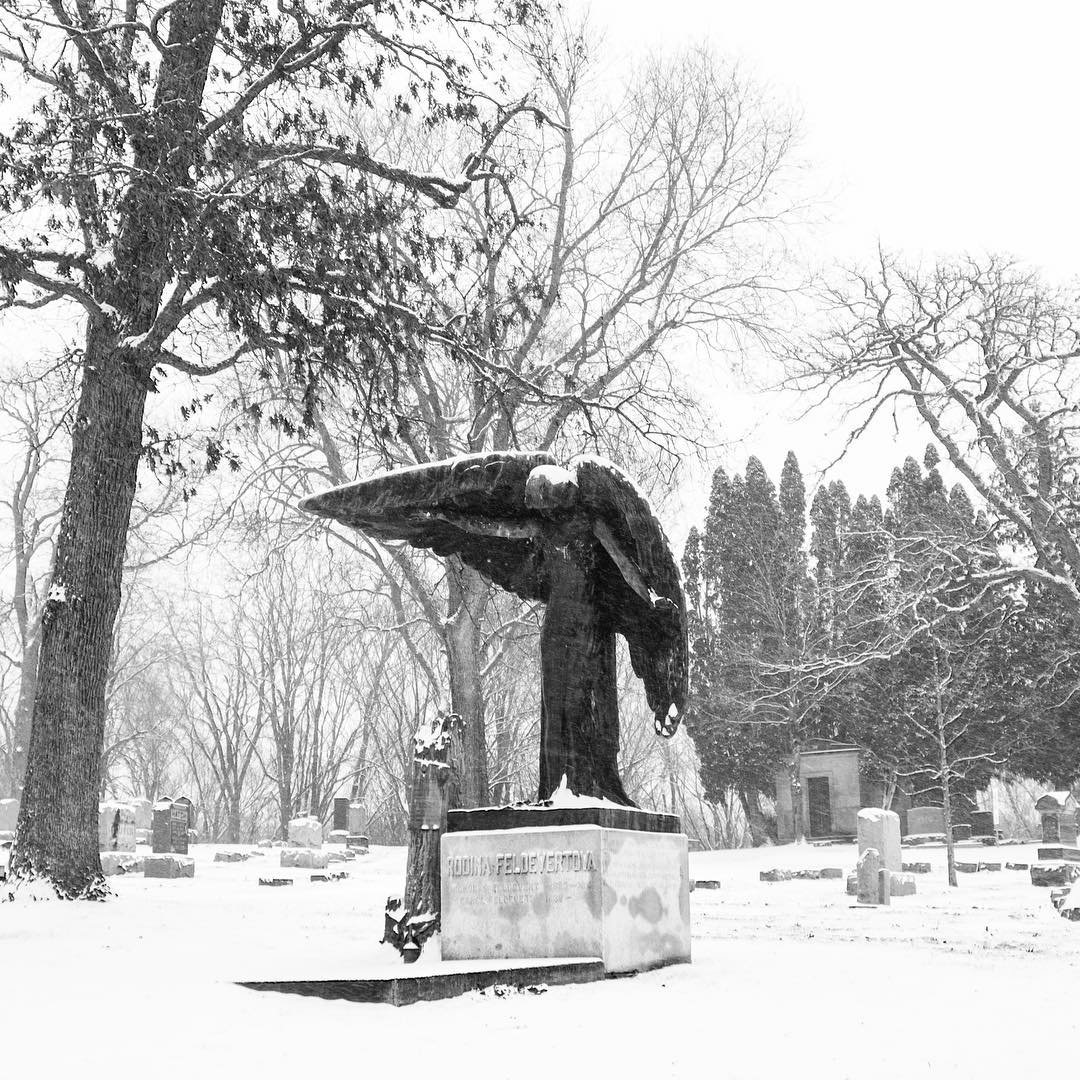 Home to the menacing eight-foot-tall Black Angel statue, this Iowa City cemetery has been scaring late-night thrill seekers for decades. The statue watches diligently over the Feldevert family plot and was once a beautiful golden monument. It was installed in 1912 to mark the sorrow of Teresa Feldevert after losing her young son and husband. After Teresa's death in 1924, the statue mysteriously began turning black, starting with the eyes. Many theories surround this strange occurrence, including the belief that Teresa was secretly a witch and cursed the statue to protect the family's gravesite. Today, these legends are accompanied by the belief that touching, or even kissing, the angel will result in instant death. Visitors also report hearing ghostly voices and seeing strange light anomalies floating throughout the cemetery.

Though Iowa has a strange collection of haunted roads, this is known as the scariest one. This stretch of gravel outside of Burlington comes with the story of a woman named Lucinda who reportedly threw herself off a nearby cliff after learning her husband left her. While locals avoid this road at night, it is a popular spot for ghost hunters. It is said that if you say Lucinda's name three times, her ghost will appear standing atop the cliff. But be warned -- should she lay a rose at your feet, legend says you will meet your demise the following day. 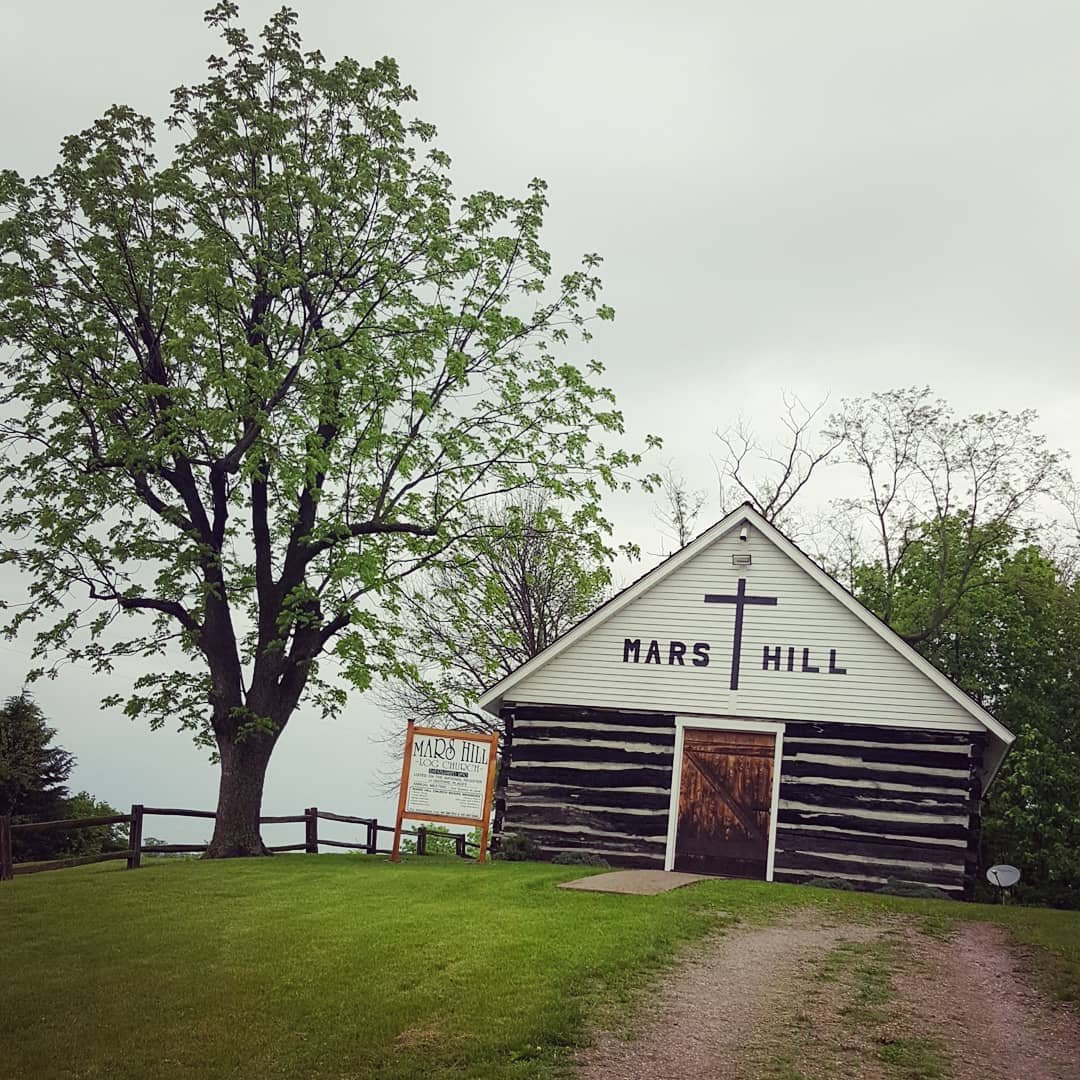 Built between 1850-1857, this log cabin church is the only one of its kind still in use in the United States and was once the largest log building in Iowa. Despite being burnt down in 2006, it was rebuilt by the community in 2008. Since then, the church and cemetery's history has continued to draw many visitors every year. The building was once an active stop on the Underground Railroad and the cemetery marks the final resting place of at least one veteran from every single American war. Today, it is known as one of the creepiest spots in Iowa and is where occasional ritual masses are held in the middle of the night with pentagrams and candles being left behind as evidence. The Ottumwa location also has its share of spirits who are believed to be slaves who never made it to freedom. 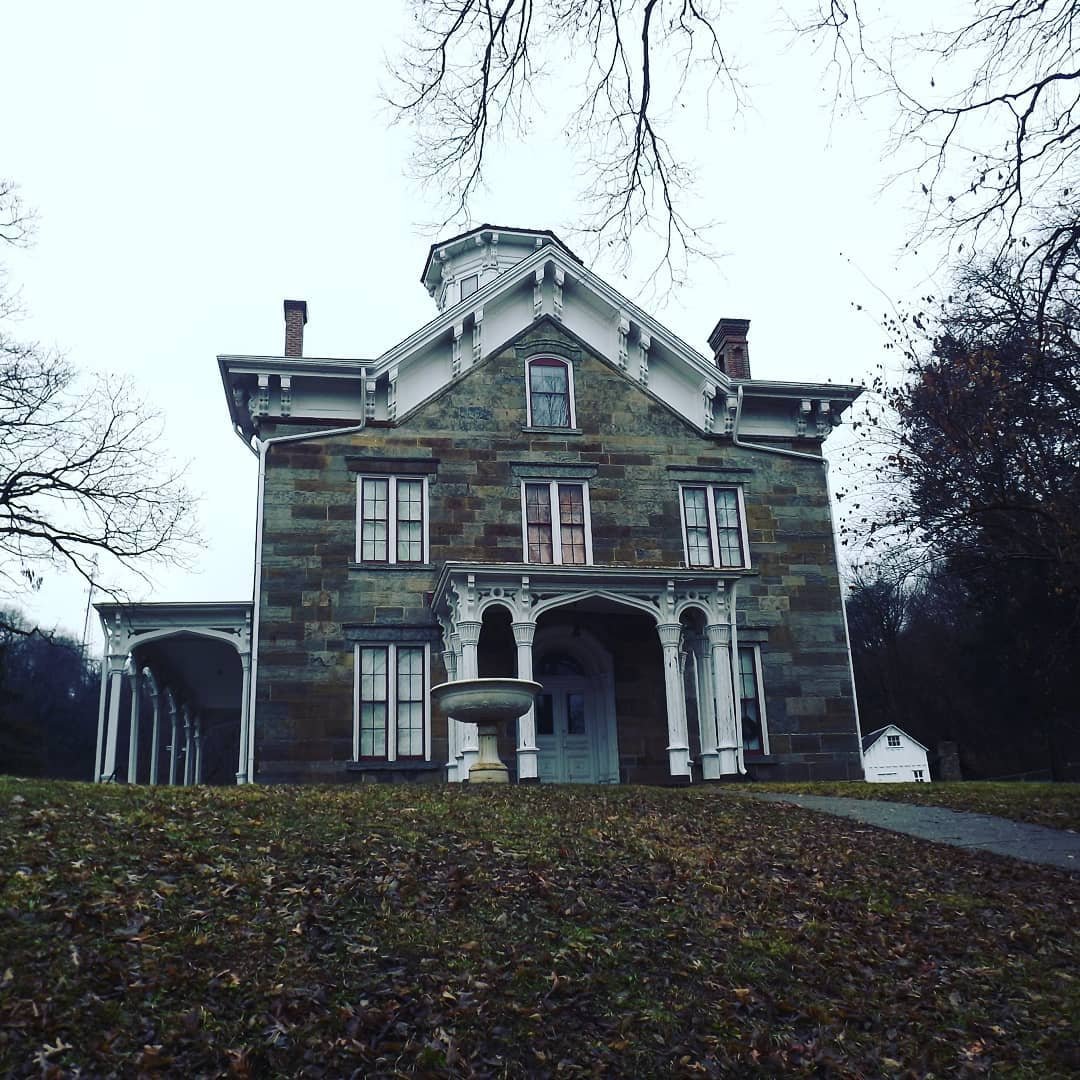 Known as a "textbook haunting," this home-turned-museum offers plenty of history and scares for visitors. The home's former owner, Mathias Ham, came to Dubuque in 1833 to take advantage of the steamboat business, where he met his wife and expanded this home to accommodate their six children. Throughout the years, several family members died in the home, including Ham, his first wife and their daughter May, as well as an intruder shot and killed by their daughter Sarah. Since being turned into a museum in 1964, employees and visitors have reported a variety of mysterious activities. While an apparition has never been seen, cold breezes randomly blow through the house, objects move unaided from room to room, lights flicker and disobey light switches and various sounds such as footsteps, scooting furniture and music from the inoperative organ can be heard. 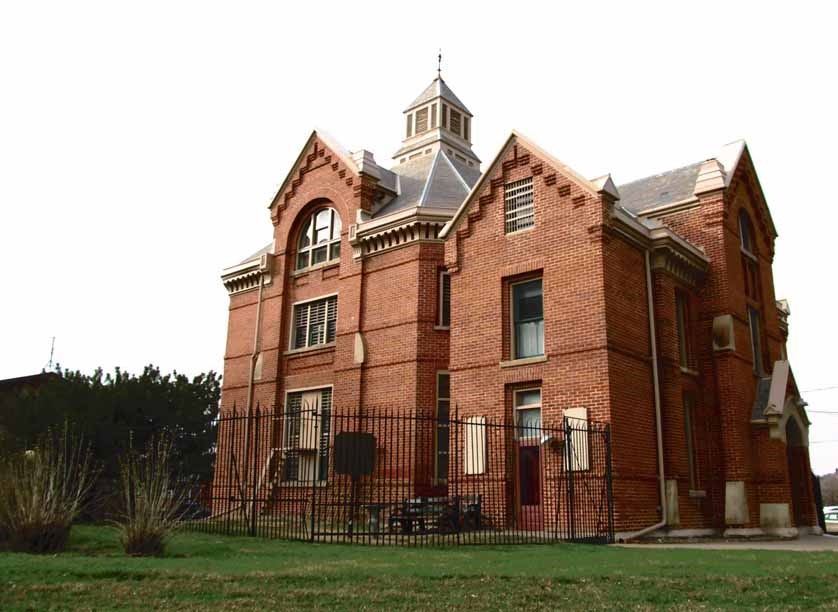 As the only three-story revolving jail ever built, the Squirrel Cage Jail already has an interesting history. Built in 1885 and used until 1969, today it is a museum and tourist attraction featuring many unexplainable occurrences. Visitors touring the Council Bluffs jail often report seeing or hearing several ghosts, including that of the jail's first resident and a young girl dressed entirely in gray. From opening and closing doors and strange lights to disembodied voices and apparitions, this historical building will be sure to give you the creeps. 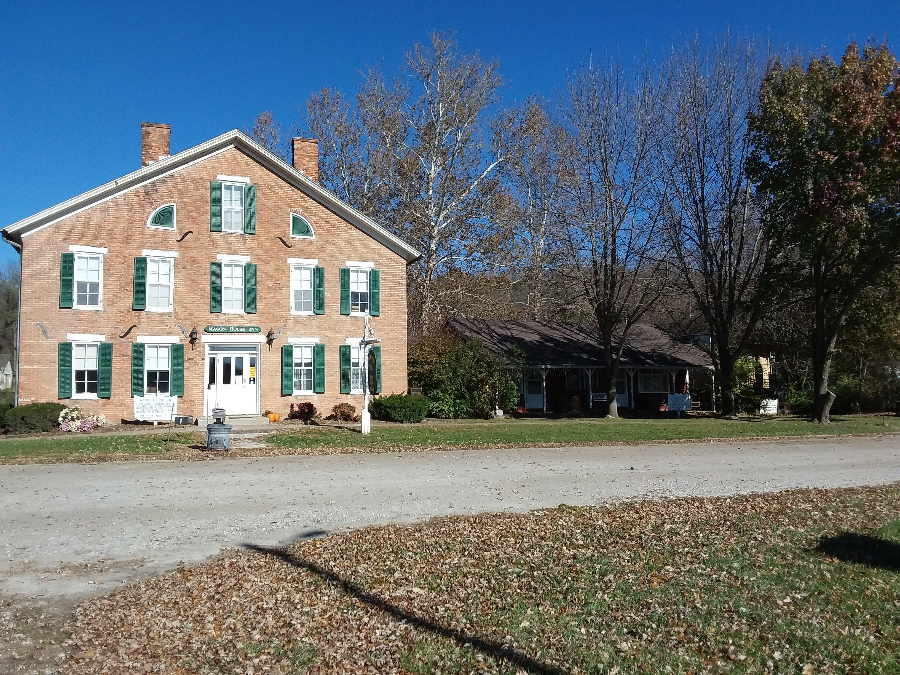 Built in 1846, this quaint hotel was once used as a hospital and a station on the Underground Railroad during the Civil War. With its rich history, the hotel is also rich in paranormal activity -- it is thought to be one of the most haunted inns in Iowa, with up to 100 spirits inhabiting it at any time. Some of these spirits include a boy on the landing of the stairs, a lady in a white night gown and an old man who stares at visitors. Spend a night in one of the Keosauqua inn's nine themed rooms to see them for yourself.

Built in 1917 as a luxury hotel, the building was then closed in 1973 and sat abandoned for nearly a decade. In 1982, a local family purchased the property and restored it to the hotel it is today. However, the building reportedly houses several unwelcomed guests. In the basement, the apparition of a woman wearing white is often seen and the face of a man follows guests down the halls. Other apparitions have been seen throughout the building, often accompanied by sounds of breathing. Book a room to experience it for yourself.

Built in the 1880s as the town's first hotel, the building has since gone through various owners, once housing a nursing home and group home, before being bought by the current owner. Visitors to the property can schedule 30-minute guided tours Tuesday through Sunday for $10/person, or reserve the property for overnight paranormal investigations. Guests have reported seeing and hearing everything from shadow figures and voices to unexplained sounds like moans, screams and footsteps.

Built in 1888 as Iowa's third mental health institution, the building now houses the Clarinda Treatment Complex, a correctional campus and human services location. However, one ward contains a museum of the hospital's history that you can visit with an appointment to view medical artifacts, tools and furniture. Employees and visitors to the complex often report hearing voices and having the goose-bump feeling of being watched.

Visitors to this small cemetery believe the woods behind the property is haunted. Phenomena such as glowing lights in the trees, shadow apparitions, footsteps, moaning and other strange noises have emanated from the darkness of the woods.

This cemetery's gazebo seems to be the most haunted location on the property. With gravestones dating back to the early 1800s, the cemetery's history is mostly unknown. However, people have reported seeing an elderly woman sitting in a rocking chair holding a baby inside the gazebo, evoking great sadness in all who see her. Other reports of activity include voices, orbs, loud banging and eerie howling.