Trout Amid the Cows and Willows: Fishing Iowa's Driftless Area

"We can't fish my favorite trout stream today, because there's a Jersey bull in the pasture there that hates me."

Brad Johansen, my guide for this day of fishing in the Driftless Area of northeastern Iowa, was discussing our fishing options between bites of biscuits and gravy at a diner. Mr. Johansen, a high school science teacher who guides on the side, said the bull had chased him over a fence the previous week.

"It doesn't matter, though," he said while laying a $5 bill on the table to pay for his breakfast. "I caught a 31-inch trout a few days ago in the area we're headed to this morning."

Cow pastures and cornfields are the milieu for trout angling in this hidden landscape of limestone valleys and cold-water streams. The Driftless Area occupies 24,000 square miles along the Mississippi River in Illinois, Iowa, Minnesota and Wisconsin. The word "driftless" refers to the lack of gravelly drift in the region from the last glaciation 12,000 years ago. The Wisconsonian glacier that plowed under much of the upper Midwest missed this pocket of more than 600 spring-fed creeks, and so the Driftless endures as 500-million-year-old karst country, where steep forested valleys descend into shadowed coulees. 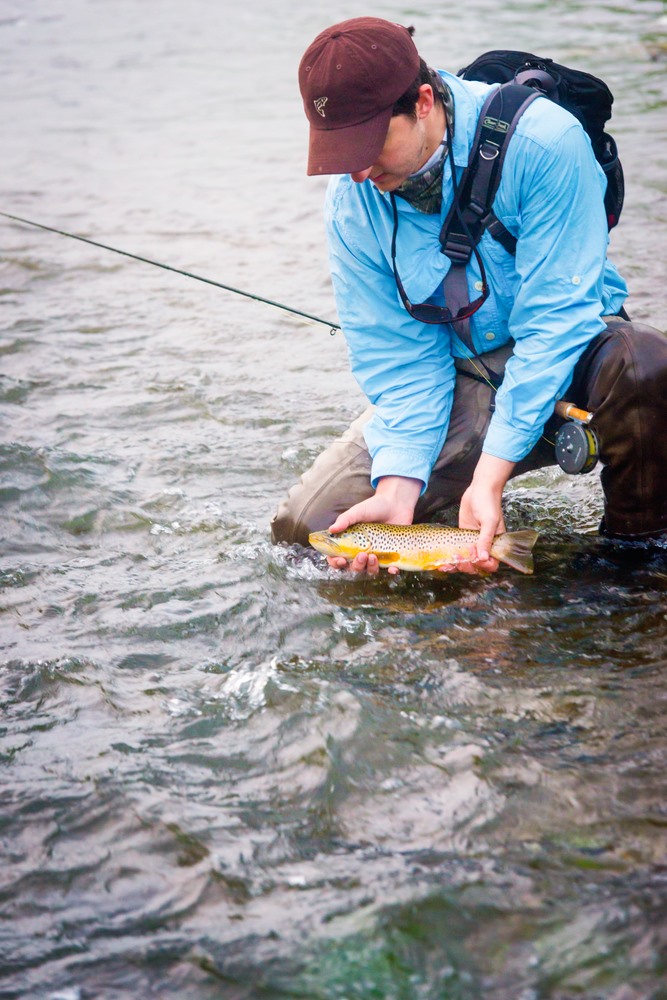 "Trout in the Driftless Area are as big and you can catch as many as the trout rivers out West," said Bill Kalishek, fisheries biologist for the Iowa Department of Natural Resources. Mr. Kalishek said some streams held as many as 4,000 trout per mile.

"Fishing the Driftless is just different," he said. "The streams are smaller. The setting is more intimate than those big Western rivers."

After miles of driving through croplands out of Decorah, Mr. Johansen guided his minivan down a one-lane gravel road in the South Pine Creek Wildlife Management Area. We bushwhacked through willow thickets along a five-foot-wide stream, scaring up bluebirds, wood ducks and a pileated woodpecker.

"These are wild trout now, so you have to be on your game," Mr. Johansen said in a whisper. "You only get one cast. If you miss your spot or get tangled up, you'll spook the hole."

Our party of four included two men casting spinning lures (me and Mr. Johansen), a bait fisherman using worms (Dennis Evelsizer, a friend of Mr. Johansen's from Decorah) and a fanatic fly angler (Mike Dvorak, a friend of mine from St. Paul). A survey by the trout advocacy group Trout Unlimited found that 74 percent of Driftless Area fishermen were fly anglers, though Mr. Johansen said most of his clients use spinning gear.

Casting spinners lacks the romanticism of waving a fly rod like an orchestra conductor, but there's a skill and an art to it, as Mr. Johansen demonstrated. He padded through the oak understory to within a few feet of the stream, then flipped his spinner -- sometimes overhand, sometimes underhand, sometimes sideways -- with surgical precision to land with a "plip" in the water near a snag of fallen branches on the opposite bank.

"My fly-fishing clients spend a lot of time untangling their equipment," he said with a grin.

On we pressed through more thickets until we reached a beaver dam with a deep pool behind it. Mr. Johansen spotted an otter sliding away. "That's not good," he said. "Otters eat lots of fish."

But his worries dissipated on my second cast, when an electric jolt shot up my rod, the tip bent, and in moments I was holding a 12-inch brook trout in my hands. It was a strikingly handsome fish, with a forest-green speckled back and orange fins.

The region teemed with brook trout when European settlers arrived in the 19th century, logged the hillsides bare and planted croplands from which topsoil washed into valley bottoms, burying streams under 12 feet of sediment in some places.

By the 1930s federal farm programs to control erosion started the comeback of the Driftless's cold-water streams, which were stocked with brown trout, rainbow trout and more brook trout. By 1980 five trout streams in Iowa's Driftless Area supported natural spawning, with only one stream harboring the last surviving lineage of Iowa's native brook trout.

With the 1980s and the rise of the Conservation Reserve Program that paid farmers to idle erosion-prone crop fields as grasslands, the Driftless Area's prairie character began to re-emerge. Today 33 trout streams in Iowa's Driftless support natural spawning.

But now Driftless trout anglers worry that high corn prices because of demand for ethanol could erase those gains, as more lands are put back to agricultural use. Mr. Dvorak, the fly angler, caught and released 10 brook trout in the pool behind the beaver dam. Mr. Johansen and Mr. Evelsizer both kept foot-long brookies. On our walk back out, I cast my spinner by a log pile in a stream bend and landed a 15-inch brown trout. Mr. Johansen unceremoniously threw mine in his plastic grocery sack with the three others.

Back at his minivan Mr. Johansen carried a black disc that looked like a wok down to the stream's edge to prepare lunch. It was actually a disc from a farm tiller with three legs screwed to the bottom. He built a fire beneath it, poured in olive oil and added venison chops, potatoes and our trout filets to the sizzling mix. Mr. Johansen handed me a cold light beer to wash down the rich trout.

For the afternoon Mr. Johansen drove us to a cow pasture to fish for trophy trout. The farmer was a friend whose permission we had secured. But we didn't ask the bull that trotted into the cornfield we were crossing to reach the stream. We froze like cottontail rabbits spotted by a fox. But the bull made a U-turn and trotted away.

"Whew," Mr. Johansen sighed. "I was about ready to dash."

Cows mooed at us as we scouted for trout hiding spots. High muddy banks rose above deep holes in the streams where flash floods had scoured out holes. In an eddy Mr. Johansen directed me to cast by a fallen oak tree. The silver spinner glinted underwater for a few moments of the retrieve. Then it was swallowed by a large fish, which surged back to the fallen tree twice before I landed the 17-inch brown trout on the muddy bank.

But it was not the biggest catch of the day. An hour later, Mr. Dvorak played a purple Woolly Bugger fly in a similar eddy and locked into a 15-minute battle with a 23-inch brown. He has fly-fished in Montana, Alaska and Colorado, yet this was the biggest stream trout he had ever caught.

"Must be because we've got better nutrient flow," Mr. Johansen said, pointing to a cow pie nestled in the grass at his feet.

The cabin-like building of McCaffery's Dolce Vita (2149 Twin Springs Road, 563.382.4723) is nestled in the scenic woods of Decorah. It features ceiling-to-floor windows so you can watch the wildlife while indulging in their delicious wood-fired pizzas and more.