The Best Pizza in Iowa

From kung pao chicken to raspberry spread and buffalo sauce, there is NOTHING that Iowa’s inventive chefs will not try on pizza. We held a head-to-head competition to find the best slice of pizza in Iowa. With nearly 15,000 votes cast, Adair's Zipp's Pizzaria was crowned Travel Iowa's Pizza Pie champ.  Be sure to plan a stop at all of these pizzerias across the state!

A & A Pagliai's Pizza, Iowa City 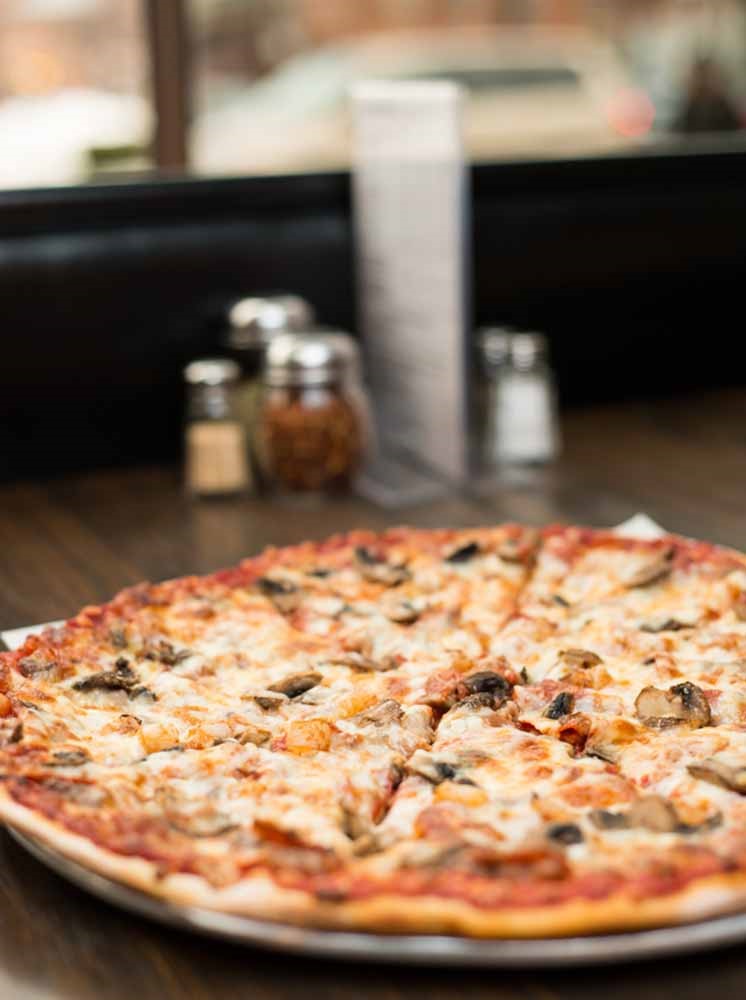 From Florence, Italy, to Ames, then to Iowa City, Pagliai's has become an institution in college communities around the country. Armed with a pizza recipe his mother brought when she and her husband emigrated to Iowa in 1914, Sam Pagliai decided a college community and a great pizza recipe were a winning combination. By 1962, Pagliai's opened on the northern edge of downtown Iowa City. The restaurant serves up as many as 350 pizzas during peak hours. Pagliai's specialty is the Palace Special, a thin-crust pie topped with sausage, beef pepperoni, mushrooms and onions. Today, there are also Pagliai's locations in Johnston and Grinnell. 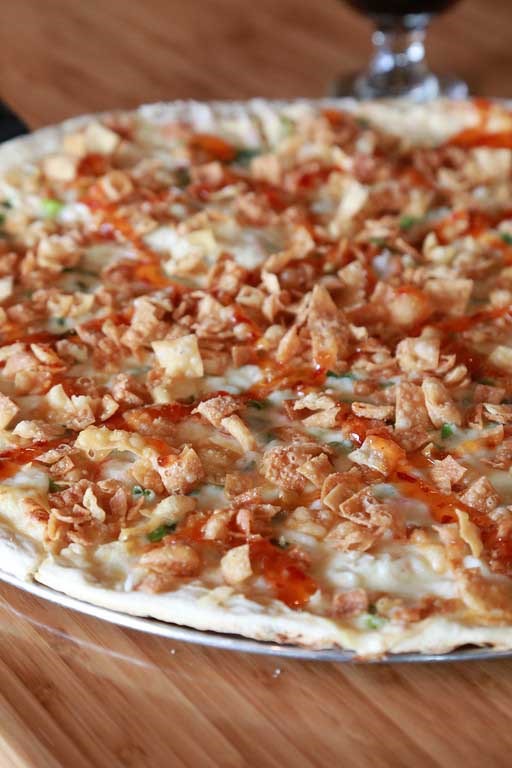 When Dennis Epps and Gwen Page acquired Des Moines' shuttered King Ying Low Chinese restaurant in 2009, they wanted to create a pizza restaurant with a tiki bar. They took the concept to a whole new level with Chinese decor, tiki drinks and a pizza menu that fuses Asian and Italian. Fong's Pizza and Tiki Bar serves up 32 different specialty pizzas - like Chinese takeout on a pie. The Crab Rangoon pizza is Fong's best seller and was named Iowa's best pizza by Food Network magazine. It also has been featured by Alton Brown on the Food Network, as well as on the Travel Channel. If you're a fan of kung pao chicken, Moo Shu pork, or beef and broccoli stir fry, you can find those on Fong's pizza menu, too. 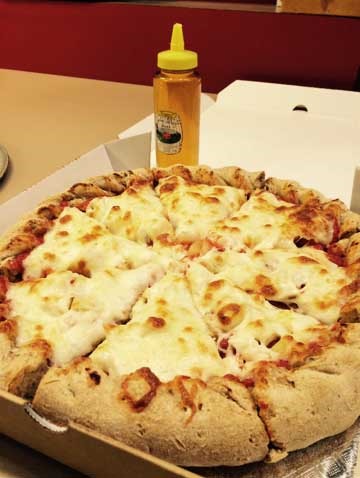 Known as Great Plains Pizza, the founders of this eatery had originally planned to open up a bar with a deli counter in downtown Ames in a building once occupied by a pizzeria. The landlord suggested opening a pizza business instead, since the equipment for making pizzas was already there. The rest is history. Great Plains Sauce and Dough Company is famous for its six different crust offerings, three thick and three thin. Midwest Living magazine rated Great Plains as one of the 27 top pizza restaurants in the Midwest. "Great Plains is the breadbasket of the pizza world. A homey, unpretentious place where Parmesan comes powdered in shakers and getting your weekly carb dosage in an evening is just good manners," the magazine's editors wrote.

Named by the Des Moines Register as one of "100 Places to Eat in Iowa Before You Die," Mabe's Pizza might never have become a pizzeria if not for an employee who chose to make himself a pie for lunch. Mabel White started the business in 1953 as a lunchroom that attracted Luther College students in Decorah. One of the workers asked if he could make himself a pizza. Mabel tried a slice and decided to change the entire business. Mabe's is famous for its pizza cut into squares. Special pizzas include the Chicken Cordon Bleu (chicken, diced ham, Bleu cheese sauce and special cheeses) and Philly Cheese Steak (creamy Swiss cheese sauce, steak pieces, onions, green peppers and cheese). It's become a popular spot for presidential hopefuls over the years. 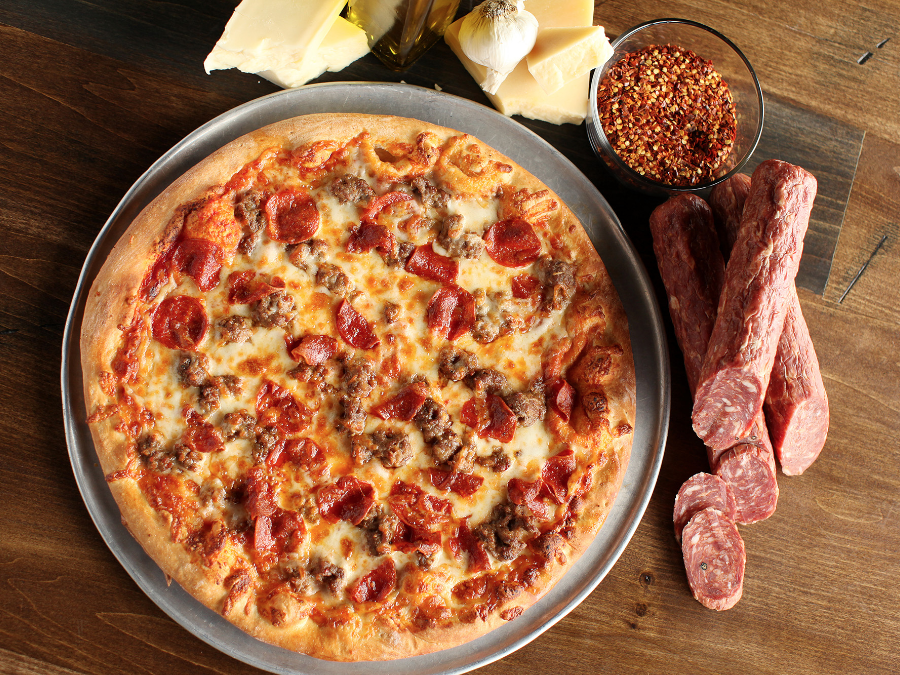 An institution in LeMars for 20 years, P's Pizza House describes itself as "a progressive American eatery." Founded in 1995 by Marty Pippett as Mr. P's Pizza, the restaurant was acquired in 2009 by Joe and Bobbie Sitzman, who had previously run restaurants in Kansas City and Omaha. The Sitzmans changed the name to P's Pizza House and brought unique flair to a menu that also features ribs, wings and other basic fare along with their Pepperoni Cream Cheese pizza. The pie includes house-made red sauce, whole milk mozzarella, premium sliced pepperoni, sliced pepperoncini peppers and pinches of cream cheese over an American-style dough. 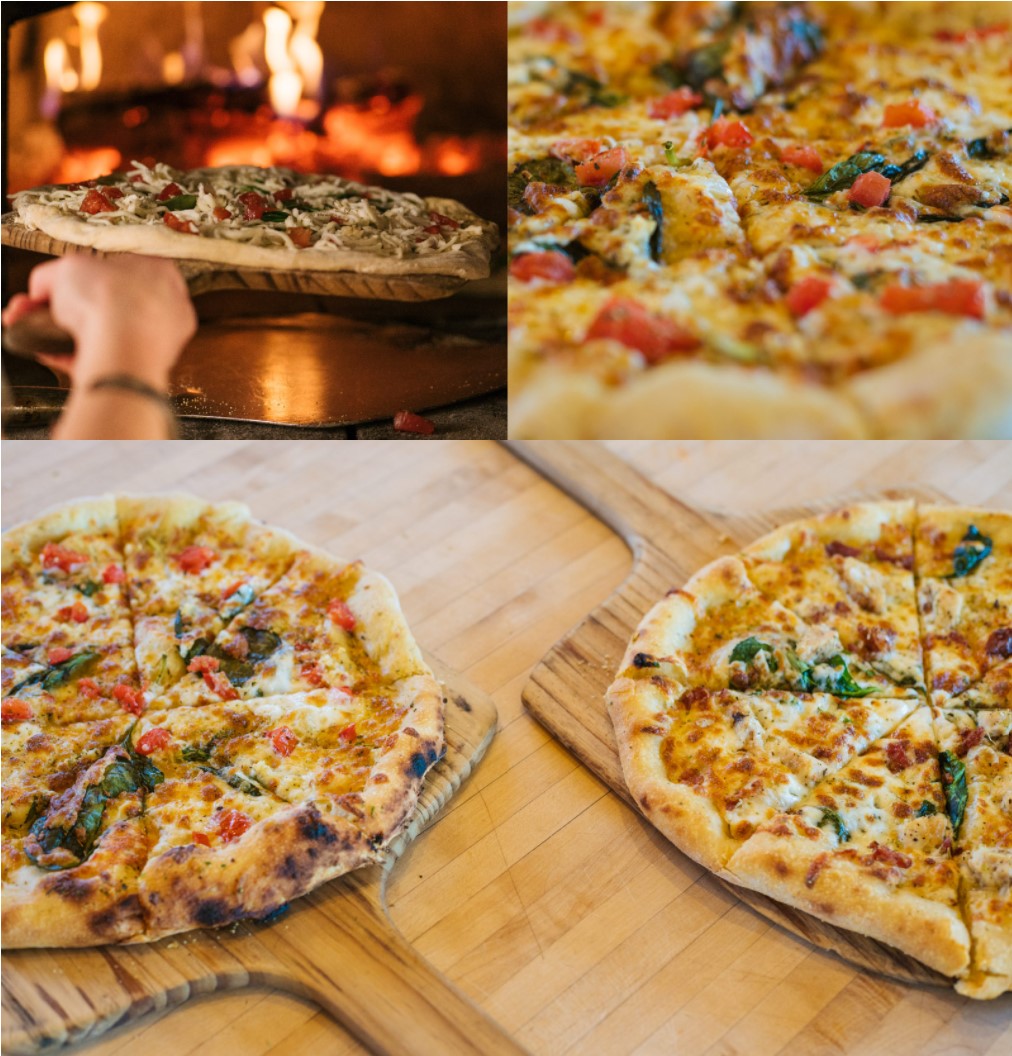 Pizza lovers normally would not think of a winery as a place to grab a great pie, but Iowa's wineries like to play it different. Though Santa Maria Winery in Carroll has stopped serving pizza since this competition was completed, another great winery and pizza spot can be found in Durango. Serving gourmet brick oven pizza baked on-site, Park Farm Winery attacts pizza lovers from across the state. Handmade from their own dough recipe fresh daily, these savory pizzas are made to-order, giving customers the opportunity to try something new with over 20 toppings and two sauces. You can build your own creation or try one of their weekend specials or signature styles. 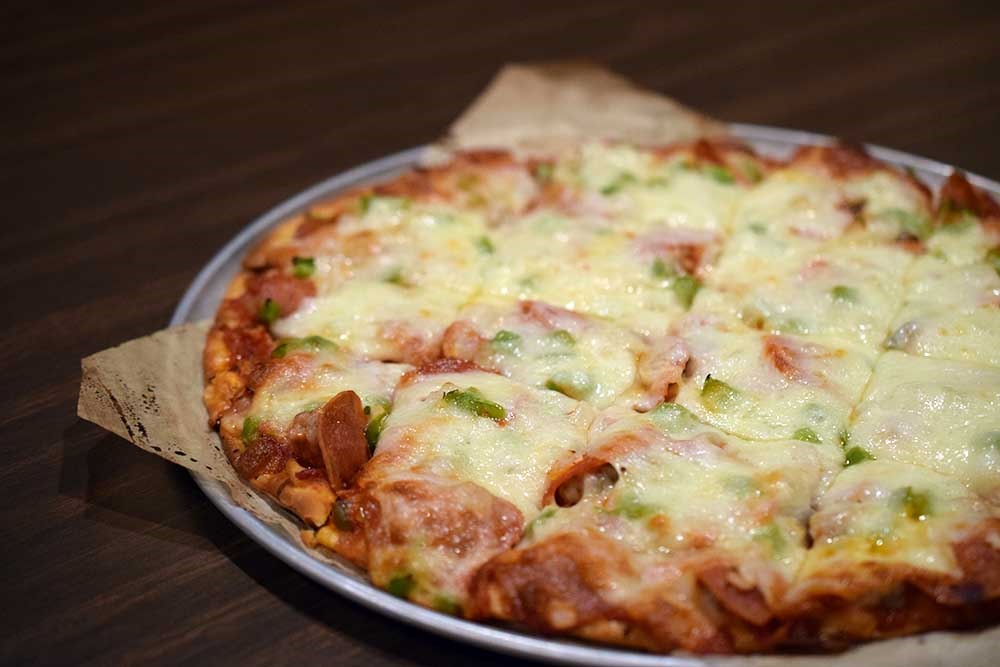 Zeno's has been a central Iowa staple for nearly 64 years in the same downtown location in Marshalltown, albeit with different owners. Originally founded by Chicagoans Cosmos Nigrelli and Joe Liberio, the business eventually was acquired by Elmer Zeno Kluck who changed the pizzeria's name. New owners Aaron and Michelle Busbee have retained the thin crust pizza recipes that made Zeno's a top draw. In fact, Zeno's earned a certificate of excellence last year from Trip Advisor. The restaurant is known for traditional pizza concoctions as well as a few new wrinkles. The Bavarian pizza includes bacon and sauerkraut. And Zeno's offers a BLT, which, just like the sandwich, is a pie loaded with bacon, lettuce and tomato, along with homemade sauce and provolone cheese. 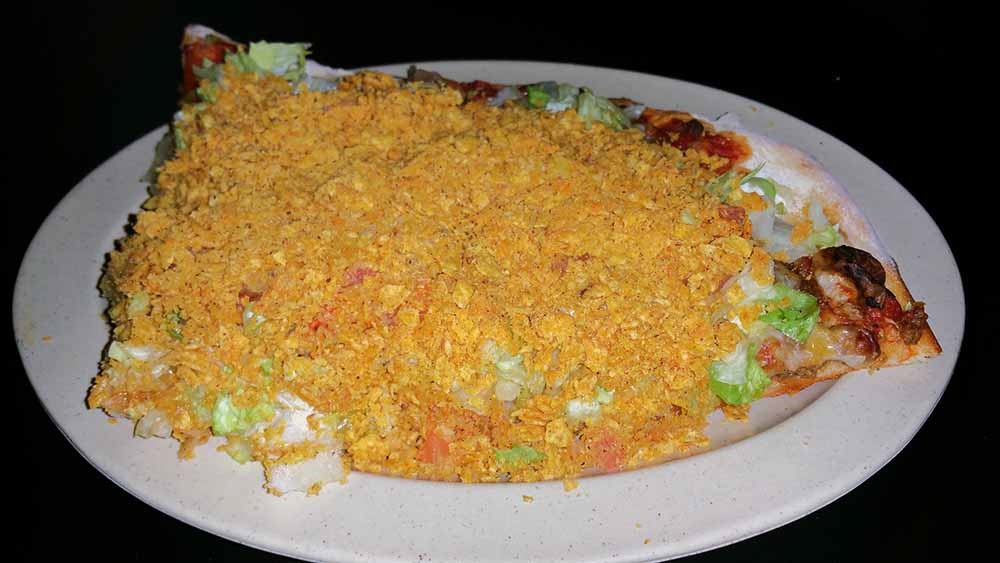 The small town of Adair stands out among all of the communities along I-80 because of its famous smiley face water tower. The tower and other local trappings are immortalized in pizza at Zipp's Pizzaria. Jim Zimmerline founded the pizzeria in 2012 determined to make pizza his own way. In addition to traditional pizzas, Zipp's concoctions include chili dog, crab Rangoon, taco, chicken bacon ranch and Reuben. Specialties include pizzas named after local icons. There's the Bomber, an all-meat pizza named after Adair-Casey High School teams; the Jesse James, a supreme; and Ole Smiley, a baked potato pizza named after the city's famous water tower. 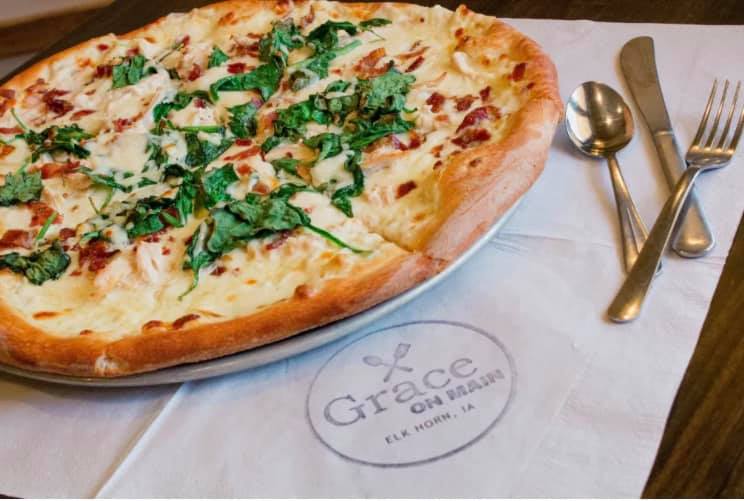 Unsuspecting visitors to Elk Horn will be pleasantly surprised to find Grace on Main, a hidden Iowa gem serving delicious Italian inspired scratch made dishes like pizza, pasta, salads, sandwiches and desserts. Their pizzas are especially renowned with house-made sauces, hand-tossed dough and fresh toppings combined to create tasty specials like the corned beef and cabbage pizza and the Gut Bomb pizza topped with house-made thousand island, mozzarella, all beef frank hot dogs, pickles, meat chili and tater tots. This family owned restaurant was started by Ilee Muller and her husband, who moved to Elk Horn after visiting and falling in love with the rural community. Today, they've put everything into their quaint restaurant and it has definitely paid off. Grace on Main has earned awards such as 2020's New Business of the Year, 2020's Rural Operator of the Year and 2021's Outstanding Dining Business. 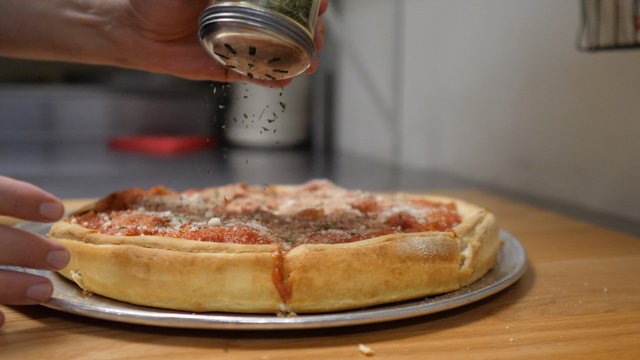 Founded by Reno Vitale, who moved to Iowa from Palermo, Sicily, Salvatore's has remained a staple in downtown Muscatine since 1985. Their infamous family recipes were handed down from Reno's grandmother in Italy and their authentic flavors continue to attract foodies from across the state and beyond. Stop by for a delicious pizza, pasta or steak and see three generations of Vitale's at work!

A household name in the Quad Cities, Harris Pizza has been serving unique flavors for nearly half a century. Its claim to fame is the Original Quad City Style Pizza, which features hand-tossed crust, quality ingredients and one-of-a-kind sausage. Today, the Bettendorf pizzeria is owned and operated by the third generation of the Harris family, who are serving fourth and fifth generation customers. The Best of Iowa's Burger Joints