Seasoned travelers know that a road trip isn’t as much about getting to a destination, as it is the experiences along the way. Iowa is full of great destinations, but overflowing with unique experiences to last a lifetime. In fact, one day, years from now, I’ll be sharing the story about how I spent the night, sleeping in an old caboose in the middle of a cornfield - on purpose. Someone cue the Roger Miller song “King Of The Road.” 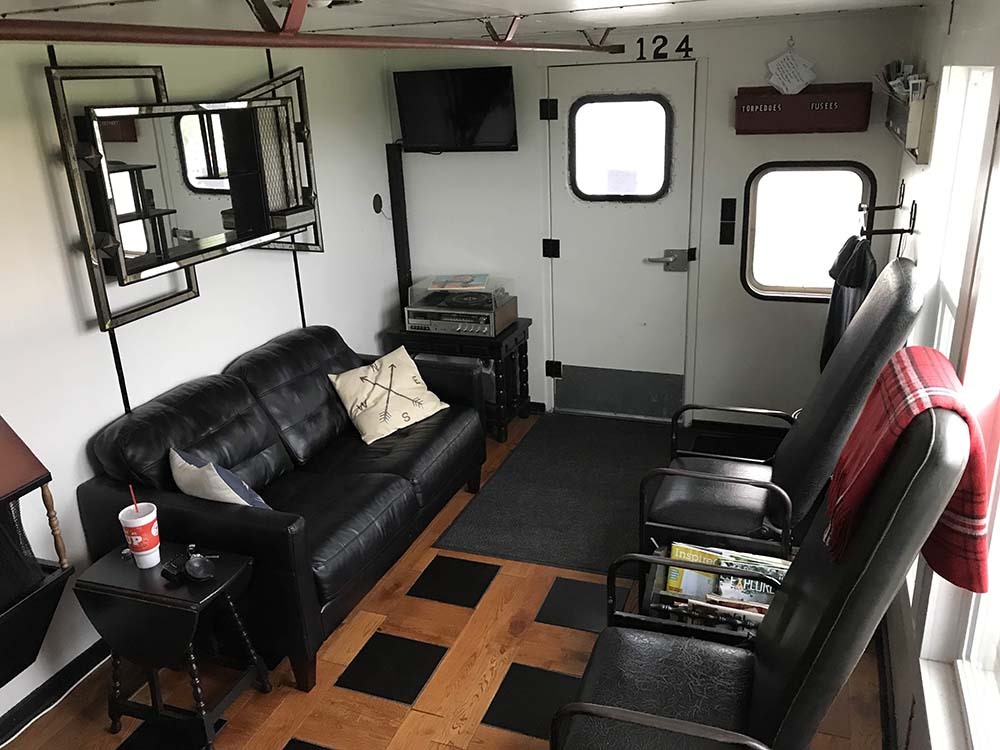 Laying on a surprisingly comfortable queen-sized bunk inside a refurbished train car near Decorah, I’m starting my journal of quirky, odd, and unique places to lay your weary head during an Iowa road trip. Glancing out of the upper window, several horses wander around, just beyond a spacious, attached deck complete with BBQ grill and lounge chairs. Inside the maroon colored caboose is a small kitchen, a seating area, bunk beds, a small bathroom and shower, and a personalized note from my host. “Welcome Bill, feel free to adjust the heat/air. Six-gallon water heater = 2-minute shower. Thanks, Jim” (You don’t realize how much water you waste at home until you've hustled through a 2-minute shower.)

The brains behind the quirky guest rental is Jim Dotzenrod. The Decorah native spotted a group of old train cars sitting in a nearby field one day, and thought it would be fun to convert one into a place where people could spend the night. Dotzenrod has worked in the carpentry field for decades, so the project was a perfect fit.

A collection of note cards, bound together with a key ring, hang just above the front door. Previous guests leave their comments for Jim once their stay is complete. Visitors have come from as far away as Australia, and all seem to share the same sentiment - this place is fun and unique. Though the space is obviously small, it'd be a great experience for a family with younger kids that enjoy the magic of trains. But, also a peaceful stop for a road tripping couple passing through the state.

Jim's latest project, a repurposed grain silo, is just yards away, and equally unique. At the top of a narrow, windy staircase, you'll find a set of bunk beds, a small bathroom, sink, and shower. The space is considerably smaller than the caboose and better suited for one person, or a couple. (There's a futon on the lower level, just in case.)  "It's a lot of fun meeting the people that visit," says Dotzenrod. "I've had great luck - everyone has been really, really nice." 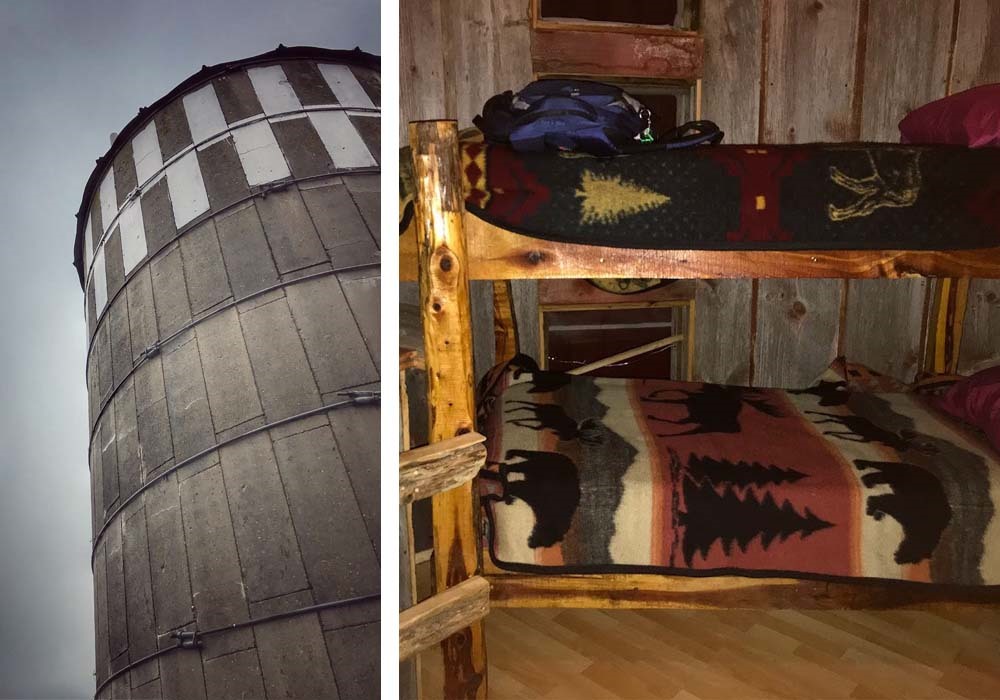 Silo on the Ridge, Decorah

Just like the caboose, the silo has a spacious deck built around it that's perfect for enjoying a peaceful Iowa sunset, or sunrise. The views of cornfields and country skies are an added bonus to your visit. Both venues provided great sleep, though the top bunk can be daunting if you haven't slept on one since childhood. The natural light, especially in the silo, is a great alarm clock. There's also no Wi-Fi and that's a good thing.

While not on a main street, it still appears so authentic that, on occasion, drivers pull in expecting to fill up their tanks or grab a snack. (The gas pumps don’t really work, and the only snacks inside are Juicy Fruit bubblegum packs from the 50s.) McCormick loves to work on cars, and share his great memories of building them and taking them apart. The most frequent guests at Springdale Crossing are Sprint Cup drivers and fans that participate in the festivities at the local track in nearby Knoxville. They’ve had guests from as far away as Europe, and have hosted racing teams and even family reunions. "The people have been really great so far,” says McCormick. "One family that stayed here invited me to come eat steaks with them while they grilled outside. It's been a terrific experience."

The farm setting can host six adults in the apartment, while several others can stay in the loft. Many folks have rented the entire upstairs. 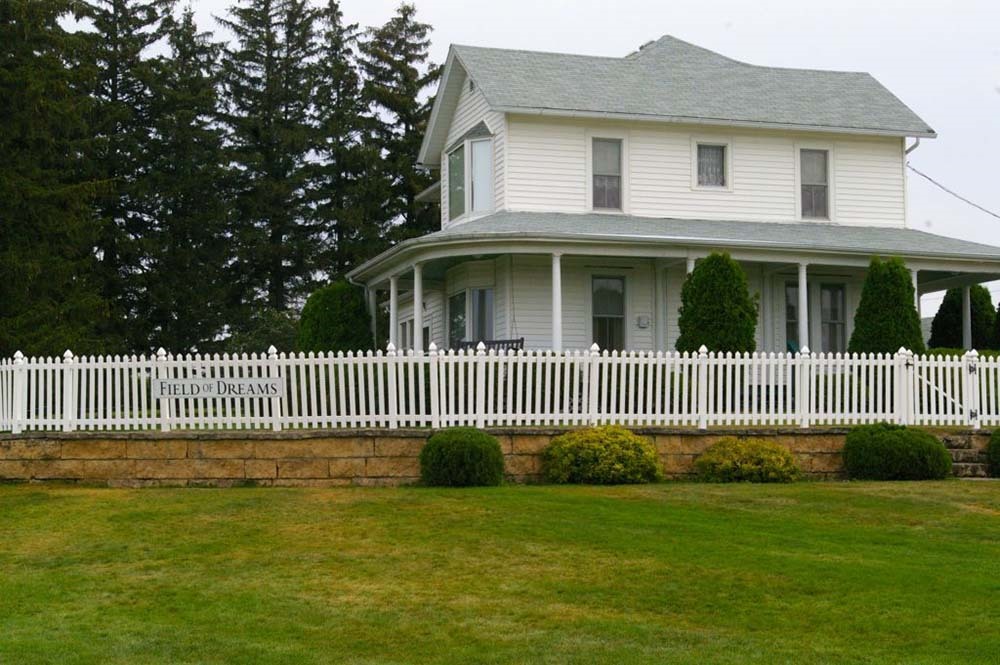 In Dyersville, the Field of Dreams movie site still draws fans, thirty years after the Kevin Costner film hit the big screen. That site now has its own quirky, rental space - the actual home that was used in the movie. Guests can rent the house, which includes access to the famous baseball diamond where "Shoeless" Joe Jackson appeared after walking out of a cornfield. The reactions have been overwhelmingly positive. A California family recently spent the night as well as a couple from the Kansas City area.

"I honestly can't believe that people are still interested all these years after the film," quipped Betty Boeckenstedt, who grew up in the home until she graduated college in 1959. Her brother was still living on the site during the filming. Betty says she was featured as an extra in some of the scenes and was able to see the filming process up close. "They filmed inside the actual house, which some people don't know. It wasn't on a sound stage in Hollywood, it was right here in Dyersville." She said it's still pretty neat that people have shown such interest in the place where she grew up.

In addition to spending the night inside the Kinsella's upstairs bedroom, guests will be greeted by the movie site staff and get a special gift basket. The basket includes a collectors edition Rawlings baseball, and a DVD of the Field of Dreams. Guests also get a bottle of wine, two glasses and a picnic tablecloth to enjoy in centerfield like the characters Ray and Annie did in the film. 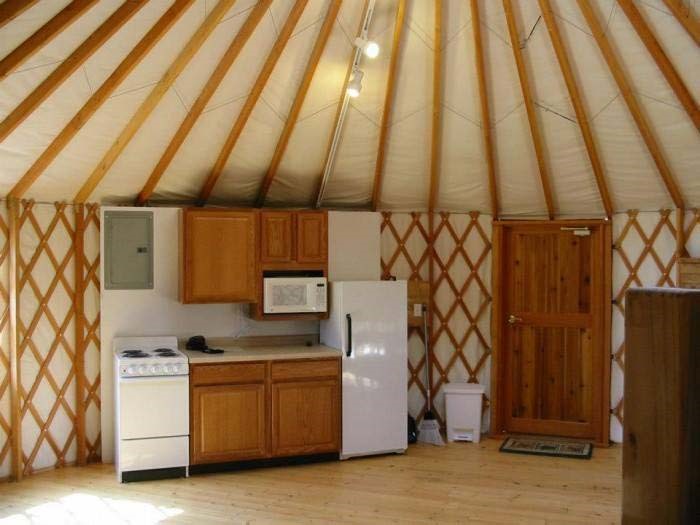 Another quirky spot is in Winterset - best known for its ties to John Wayne and the film Bridges of Madison County. Pammel Park offers two yurt cabins that can be rented during the camping season. A yurt has been described as an "architectural wonder" - due to its shape and space, using minimal materials. The yurts in Madison County include two sets of bunks, one futon and one sofa sleeper. They have heating and air conditioning. Other features include electricity, track lighting, a dining table, and a kitchenette equipped with an electric stove, microwave and a fridge.

If you favor an artful experience, another unique Iowa spot is known as the "art church." Artist Zack Jones owns the building in Malvern which serves as a rental property and art gallery. "I think most people are surprised that a contemporary studio apartment is inside this church from 1873," says Jones. The before and after photos show the hard work that went into restoring the historic property. For some guests, it's a perfect spot for their first real exposure to the art world. As an added bonus, visitors can see what Zack is currently working on. The term "art church" reflects rural artists and historical preservation. The church currently has no particular ties to a single religion.

No matter where you decide to stop on your next Iowa road trip, allow plenty of time to make lots of great (and one-of-a-kind) memories!

Bill Clevlen travels across America and tells the stories of great people and places. Find more of his work on his blog, Bill on the Road.