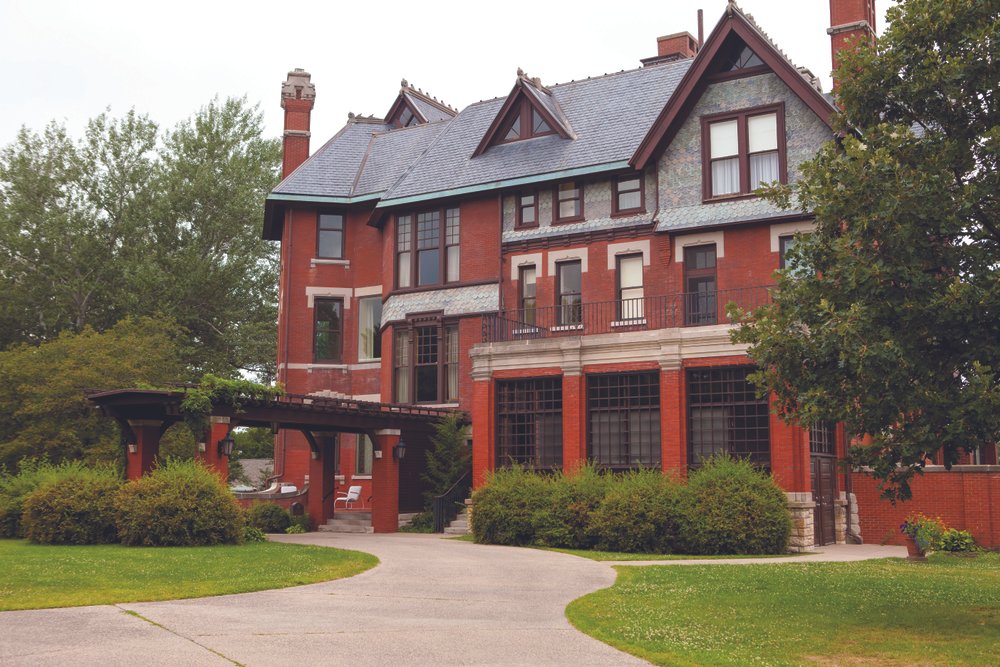 "A century of stories within 26 acres."

Once known as the “grandest house west of Chicago,” the Brucemore estate takes visitors back through the history of the mansion and its architecture along with Cedar Rapids’ industrial history. Having been home to three families between 1884 and 1981, the home today showcases each family’s daily lives, hobbies, pets, individual tastes and styles, and their contributions to the community and region.

With nearly 43,000 visitors each year, including people from almost all 50 states and 13 countries, Brucemore’s history is one that continues to intrigue. Guests can explore the mansion’s bucolic grounds and gardens as well as experience the history of the home through a variety of tours.

The standard tour helps visitors examine the three families who lived in the 21-room Queen Anne-style mansion and learn more about how the Sinclairs, Douglasses and Halls contributed to the social and economic growth of Cedar Rapids. As the community evolved, so too did life in the mansion, which is reflected in the art, furnishings, technology, architecture, surrounding landscape, and stories preserved at Brucemore.

Take one step further into the history of Brucemore with the Nooks and Crannies tour, which permits a visit to every floor and peeking into closed rooms to fully satisfy any curiosities. This all-access pass to the mansion lets visitors marvel at the Skinner pipe organ room, discover the architecture and oddities in the attic, and experience the sight and sound of a “rainstorm” in the basement Tahitian Room.

Finally, The Hired Help tour gives visitors a look at the mansion from the eyes of the domestic servants who lived there in the early twentieth century. Consider what it was like to live and work on one of Iowa’s grandest estates while discovering the servants’ living quarters and the Servants’ Village, an area only open to the public during this tour. Visitors can also view documents, photographs, and other materials from Brucemore’s collection to enrich the understanding of the relationships between the employers and their staff.

Though each tour allows guests to experience the home in a different way, there are a couple aspects of the mansion that thrill guests despite which tour they are taking. One of the many artifacts in the magnificent mansion includes the original 1940s man cave that has been surprising guests since it was added to the home by the Hall family. 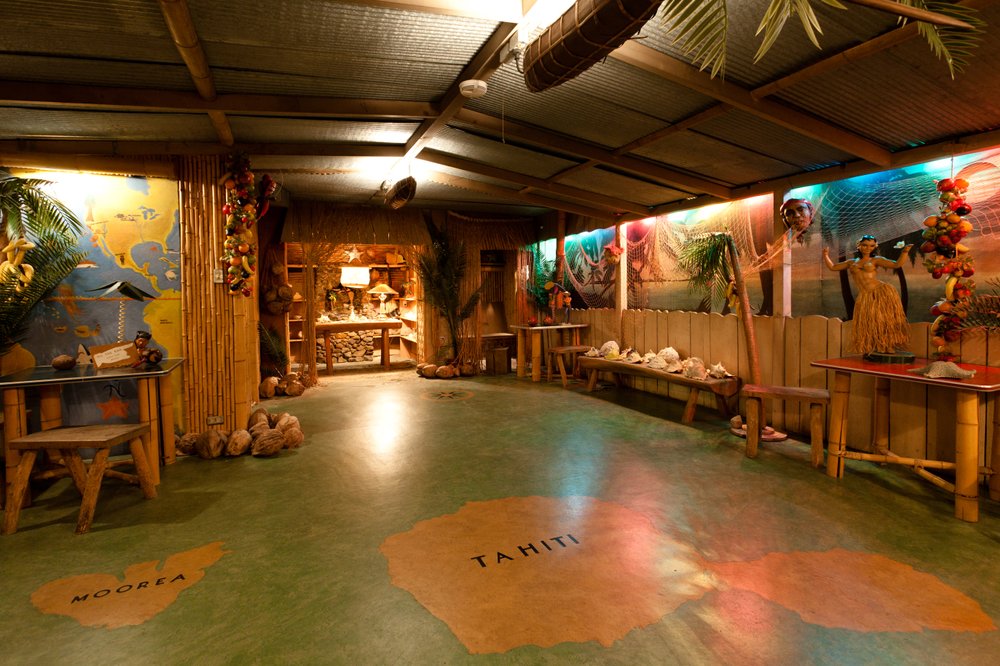 Howard Hall was no stranger to themed barrooms after having created his own speakeasy in the basement of the couple’s first home. In this home, he started the man cave with a Western-saloon themed bar in the northwest corner of the basement, which featured birch-bark lined walls, a player piano, and a bar rescued from a closing local tavern, an area that became known as the Grizzly Bar.

Then, following America’s late 1930s obsession with “tiki” culture, Howard hired local artisans to create the Tahitian Room. This included adding a floor that featured a hand-cut linoleum map of the South Pacific and walls and ceilings covered in thatch, representing the interior of a Tahitian hut. Then he installed a rain system on the room’s east wall to truly transport his guests to the tropics.

Throughout the Halls’ time in the home, the Tahitian Room was used not just to entertain, but also to make a lasting impression on his business associates who came to visit. The room continues to make impressions on Brucemore visitors today, offering a brief visit to a tropical island.

The other notable room in the house is the Grant Wood Sleeping Porch, which was added by the Douglas family. Irene Douglas was known as the family’s patron of the arts and had the financial resources and access to purchase art from all over the country. However, her art collection stayed more local in support of her community and friends. 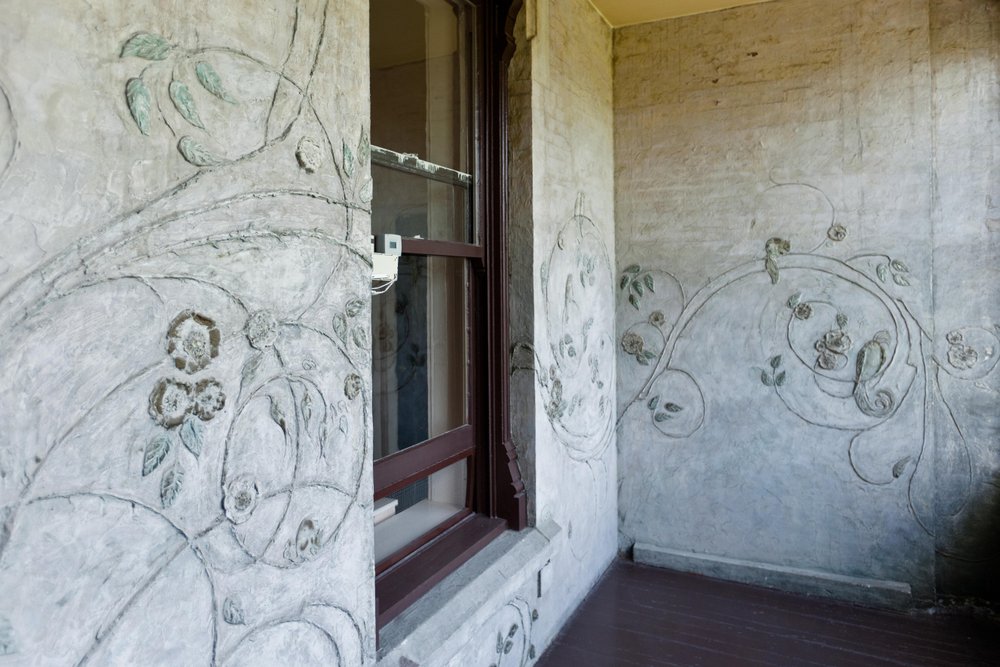 One such artist friend was Grant Wood, who Irene worked and socialized with long before he created the iconic 1930 American Gothic painting. In 1925, Irene hired Wood to decorate her daughter’s sleeping porch, an area that was then viewed as a healthy way to connect with the outdoors while also offering relief from hot summer nights in an un-airconditioned home. The porch is decorated in a plaster relief depicting curving vines, flowers, birds, and animals, offering visitors the unique opportunity to see the artist’s versatility and skill.

Today, these rooms and the entire mansion are carefully preserved by the National Trust for Historic Preservation, who the house was signed over to by Margaret Hall in 1981. The National Trust was signed into effect by President Truman in 1949, and today works to save America’s historic places for the next generation.

For the last 40 years, the National Trust and a local board have worked together to rehabilitate, restore, and preserve the estate. They’ve restored the mansion’s 1929 Skinner player pipe organ, made the conservation of the Grant Wood Sleeping Porch an institutional priority, rehabilitated the Lord & Burnham Greenhouse (also known as the heart of the estate), restored the study to its 1910 appearance, and preserved the home’s five massive limestone chimney caps.

As a result of these efforts, Brucemore is a gift that continues giving back to the community. Along with attracting thousands of visitors each year to tour the home and its bucolic grounds, the home also acts as a community partner, historic resource, and an accelerator for other local, non-profit organizations and events. It continues to support Cedar Rapids’ cultural economy by providing opportunities for over 320 independent and regional performers along with 80 private contractors and vendors.

This home's history is far from over.