Are they just playing? Or getting an education? The kids can do both at these family-friendly Iowa museums. 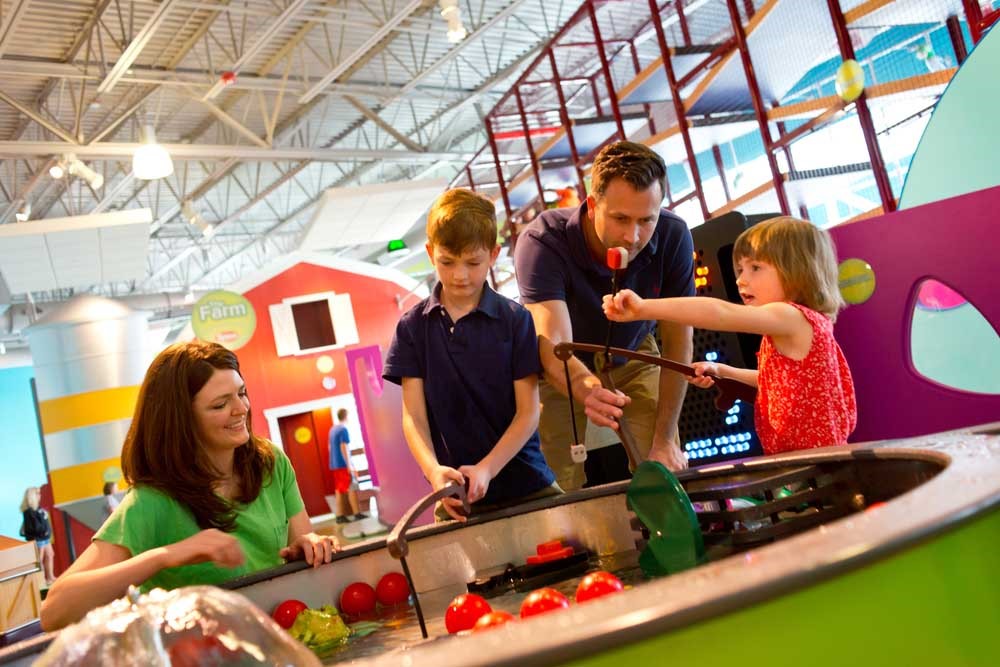 The LaunchPAD Children's Museum opened in 2016 in downtown Sioux City and features exhibits that will excite toddlers through 'tweens. Play areas include mechanics and architecture, wind, water, agriculture and a market. There is also an infant/toddler area where the littlest minds can learn. Located in the historic Pearl Street District, the museum is near the brand new Hard Rock Hotel.

The Family Museum in Bettendorf offers so much to do under one roof. Kids can wander through the town of Fox Hollow where they can shop for shoes and groceries, deliver the mail, make pizzas, sell ice cream and more. Or see what life on the farm is like by picking fruits and vegetables and getting them to market. Or explore the Mississippi River with a water table inspired by the actual stretch of the river in the Quad Cities. Or use real tools, materials and their imaginations to create in the ThinkShop! 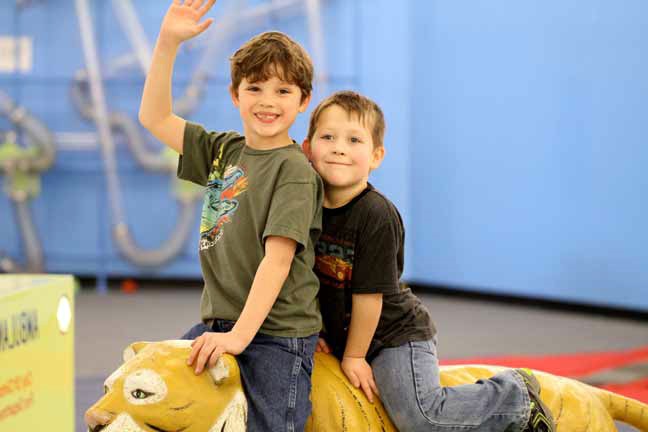 Started as a tribute to the world famous clown and Clinton native, the Felix Adler Children’s Discovery Center in Clinton houses more than 20 permanent exhibits spread over 17,000-square-feet. Kids can play with more than 10,000 KAPLA blocks, climb aboard the Brio Train Engine, make a bubble as tall as they are, play three holes of miniature golf and more.

Kids are inspired to imagine, create, discover and explore through the Power of Play at the Iowa Children’s Museum in Coralville. Fifteen play areas give kids the opportunity to create a masterpiece, take flight with state-of-the-art flight simulators, build with Lego blocks, play a variety of musical instruments or explore the notion of motion. 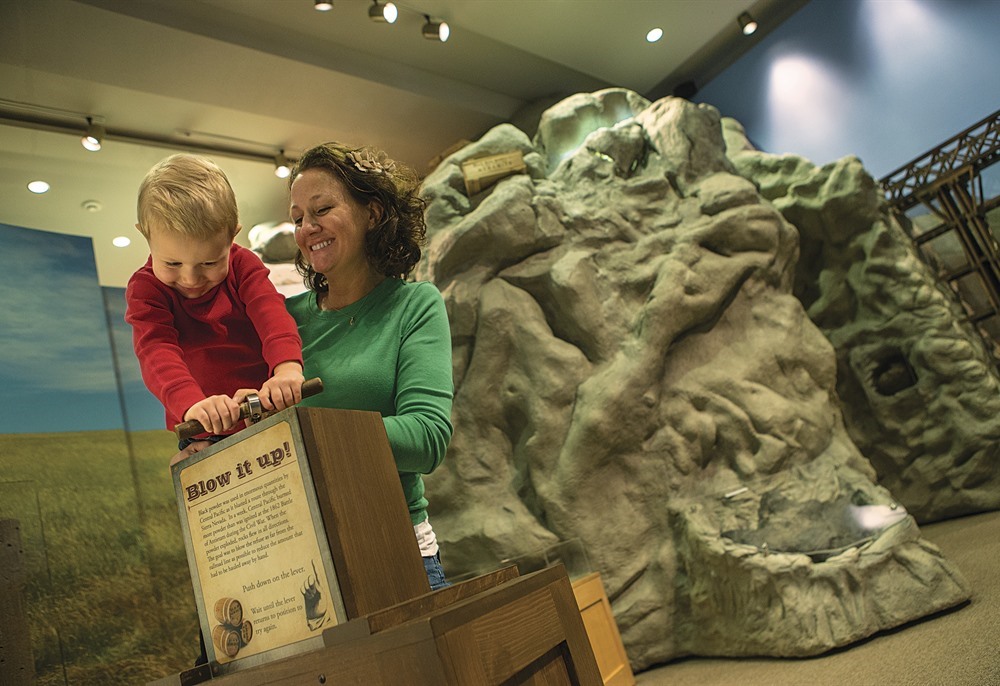 Lots of hands-on, please-DO-touch exhibits mean parents can breathe easy as their kids explore the history of the Union Pacific Railroad in Council Bluffs. In the Building America exhibit, kids (and adults) can detonate dynamite, try their hand at driving a spike or explore interactive timelines. The Lincoln Collection includes furniture from President Abraham Lincoln’s rail car, photographs, medallions and more. 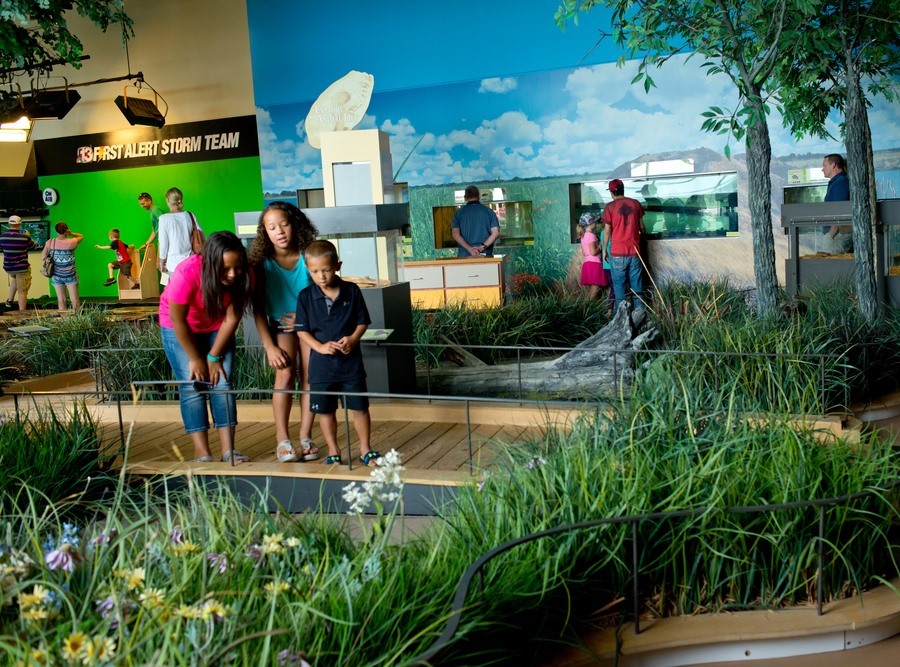 The 110,000-square-foot Science Center of Iowa in downtown Des Moines provides plenty of space for kids to explore exhibits related to science. Kids can build and launch paper rockets, try and build a freestanding arch, attempt to securely package an “egg” to survive a drop, learn more about the stars in the 50-foot domed Planetarium or catch a movie on the IMAX screen. 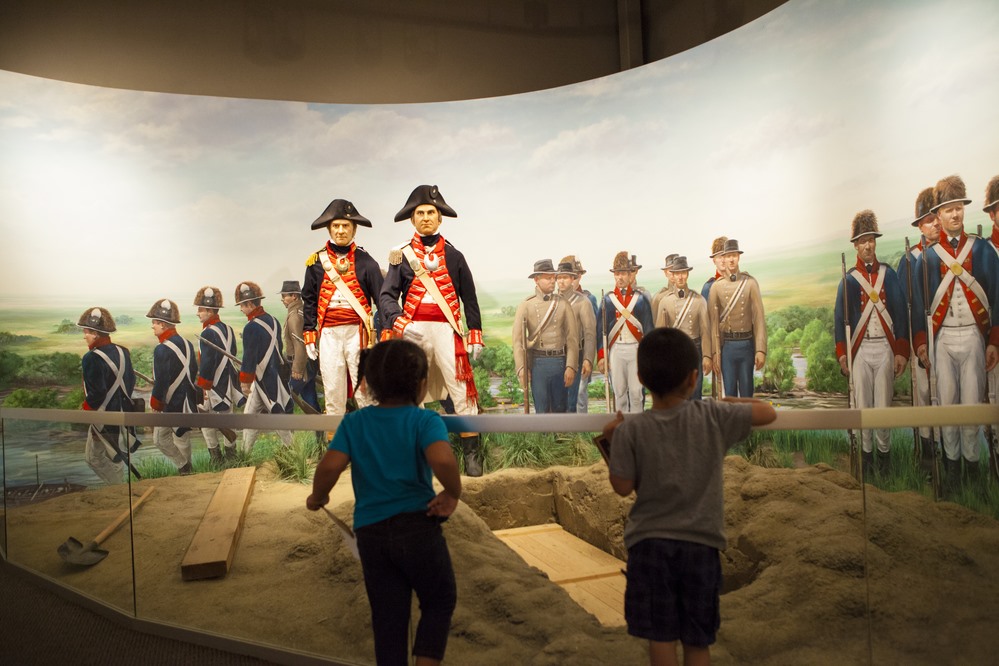 The Lewis & Clark Interpretive Center highlights the Corps of Discovery’s time in the present-day Sioux City area from late July to early September 1804. Sergeant Floyd’s death, the only fatality on the Lewis & Clark Expedition, is the center of the story. Interactive exhibits bring history to life. The adjacent Betty Strong Encounter Center features free photo and art exhibitions that explore themes of land, rivers and people of the region. 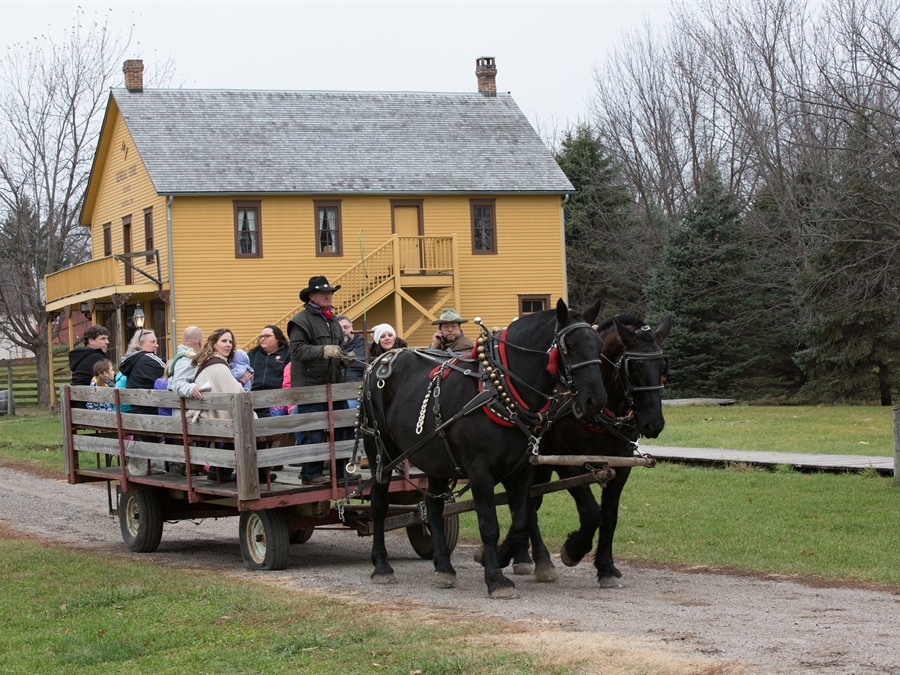 Located on 500 acres in Urbandale, Living History Farms is an open-air museum that tells the story of Iowa agriculture over the course of 300 years. Tours are self-guided and can take two to four hours. Costumed re-enactors show how Native Americans grew crops in the 1700s, how oxen revolutionized farming in the 1850s and how horses powered an agriculture revolution in the 1900s. The recreated town of Walnut Hill features more than a dozen shops, business and homes along the main street. 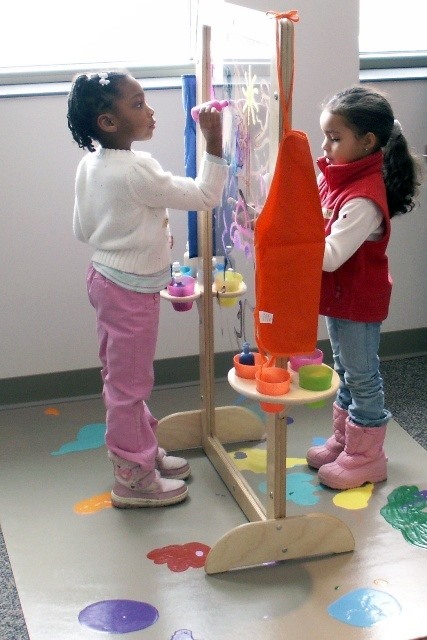 Think children’s museum but with an artistic bent. The Phelps Youth Pavilion in Waterloo is attached to the Waterloo Center for the Arts and includes numerous exhibits encouraging creativity and imagination. Climb aboard the time machine to be transported to Ancient Egypt or experience what life on a farm was like for Grant Wood (including driving a tractor into one of his paintings).

Open Tuesday-Sunday. Admission fee includes admission to the Waterloo Center for the Arts and the Phelps FunSpace. 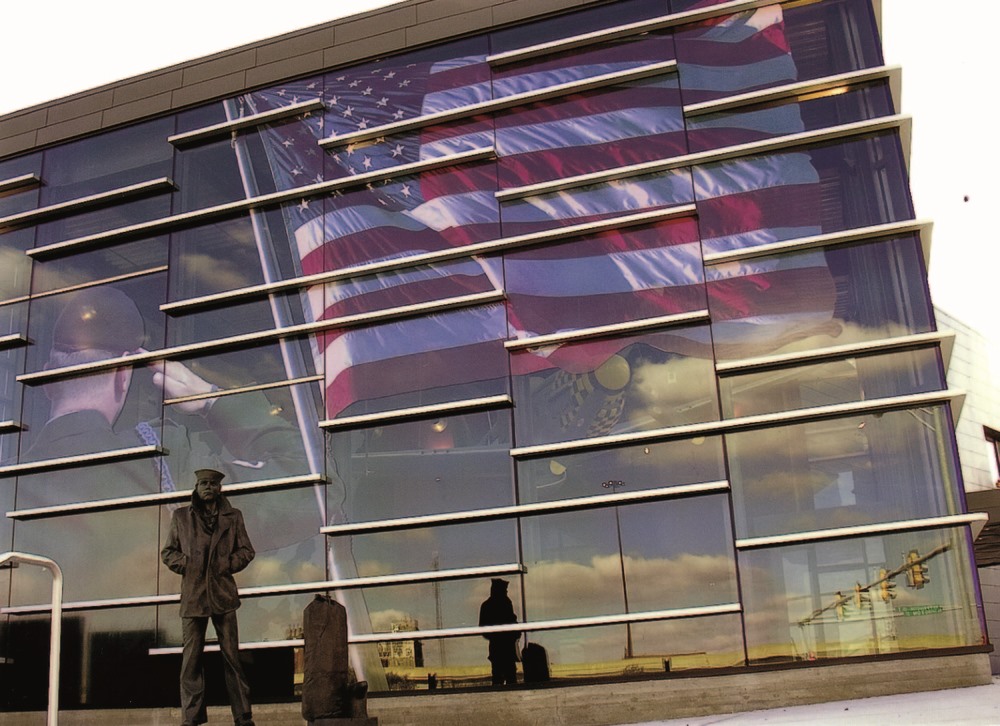 Named for the five brothers from Waterloo who served and died together in World War II, the Sullivan Brothers Iowa Veterans Museum in Waterloo honors all veterans from Iowa. Each visitor receives a dog tag that can be scanned at multiple kiosks to get a personal story from the Civil War to present conflicts. The museum is part of the larger Grout Museum District which includes the Grout Museum of History and Science, the Bluedorn Science Imaginarium and the Renssellaer Russell House Museum. 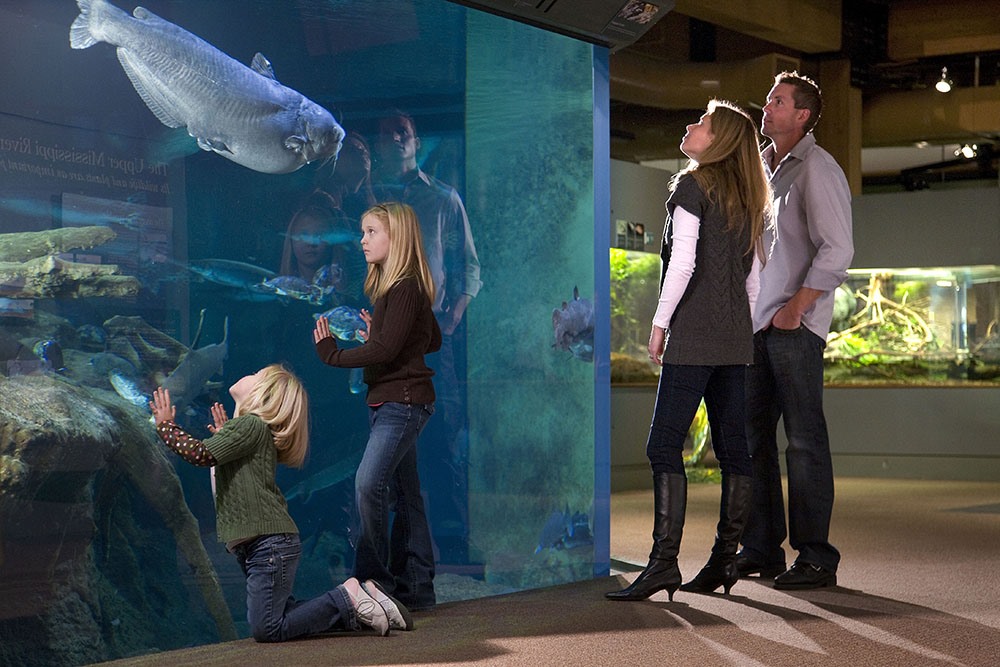 Kids can explore 12 different aquariums full of animals found in the Mississippi River at this nationally-recognized museum. Experience permanent exhibits (like the sting ray touch tank) and dynamic temporary exhibits. Learn how to pilot a barge, watch a film in the 4D theatre, and explore how water works in the water table play area. After you've learned about the river, step outside and see it up close by strolling the Dubuque river walk.